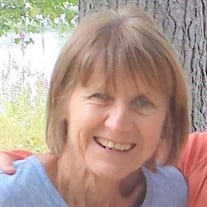 Jackie M. LaBerge Chamberlain passed away on Saturday June 27th, 2020 at UP Health System, Marquette. Jackie was surrounded by her loving, supportive family. Jacqueline Mary LaBerge Chamberlain was born on August 10, 1946 in L’Anse to Kenneth and Barbara LaBerge. Jackie attended the L’Anse schools and graduated with her class in 1964. In her school years, she was a member of the state championship Golden Eagles Drum and Bugle Corps which was directed by her father. She was an academic girls state representative. Jackie played piano for various organizations. She attended Northern Michigan University for a year, then went to work in various businesses. Jackie’s favorite job was being a teacher’s aide at the school she once attended. She cared for her students with great skill, compassion and commitment. Jackie married Pat Chamberlain on September 12th, 1967 in L’Anse. She loved spending time with her children and grandchildren more than any activity she was involved in. Living in Skanee, she created a garden from which she canned fruits and vegetables and making maple syrup was a yearly pleasure for her. She made quilts, could sew creative items with or without a pattern. She could restore furniture and put things together with a precise mind of direction, She was a connoisseur of good food and along with her daughter and sisters would prepare amazing meals. She was an avid traveler often packing up to drive to New York State to see her grandchildren or California to see her sister. Jackie always could see the good in people and loved animals, especially Porter her dog that rarely left her side. Jackie is survived by her husband Pat of 54 years, her son Andy (Jessica), daughter Jennifer, sisters Margaret Peterson (Ken), Mary Jane LaBerge ( Kate Keller), brother Peter LaBerge (Mona), grandchildren Abri and John Chamberlain, nieces and nephews, Jacqueline, David, Tom, Mike, Darcy, Emily, Holly, Heather, Kenny, many great nieces and nephews, many cousins, and sisters-in-law Bridget LaBerge, Jean LaBerge and Gail Rolof. Jackie was preceded in death by her parents, brothers Duke, Tom and Paul and nephew Jeffery. Jackie’s humility reflected in her love of St. Jude’s Children’s Hospital. Jackie was a determined fighter for life but congestive heart failure eventually won the battle. She will be missed by her family, community and all that knew her. A private family time of tears and laughter will take place Sunday July 5th in Skanee. Jackie’s obituary may also be viewed and condolences sent to the family at www.reidfuneralservicechapel.com The Reid Funeral Service and Chapel, L’Anse has been entrusted with the arrangements.

The family of Jacqueline M."Jackie" Chamberlain created this Life Tributes page to make it easy to share your memories.

Send flowers to the Chamberlain family.