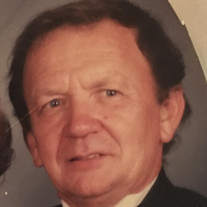 James R. ‘Jim” Kangas, age 81, of L’Anse, passed away Friday, July 28, 2017 at UP Health Systems Hospice Suite, Marquette. Jim was born in L’Anse, MI on January 3, 1936 the son of the late Waino and Anna (King) Kangas. Jim graduated from Baraga High School in 1954 and then attended the former Suomi College. He joined the US Navy in 1956 and was a Medical Corpsman. Jim married the former Charlene “Char” Bentzen at First Lutheran Church, L’Anse on October 8, 1960. He had been a chief inspector at the former Celotx Corp before working as a construction millwright, retiring after 42 years of employment. Jim had become an honorary lifetime member of United Brotherhood of Carpenters and Joiners of America – Local Union 1510. He attended United Lutheran Church, L’Anse and had been a former Boy Scout leader. Jim had enjoyed playing golf, playing basketball with his grandchildren, fishing, picking raspberries, tending to his yard, and watching the Tigers, Lions and Redwings. He was loved by all his Baraga County baseball teams he had coached over the years. Jim also was an avid hunter and for over 10 years he got his buck within an hour of going out hunting. His greatest love by far, was his family and he will be missed by all of them. Jim is survived by his loving and devoted wife, Charlene Kangas of L’Anse, daughters Kristen Kangas-Kraft of St. Johns, MI. and Stacey (Brian) Stiebe of DeWitt, MI, grandchildren Chelsea (Bo Moore) and Nathan Stiebe, Hannah and Lauren Kraft and Elizabeth, Mitchell, and Christian Kangas, brothers Wayne (Chris) Kangas of DeWitt, MI and Larry (Jean) Kangas of L’Anse. Numerous nieces, nephews and cousins also survive. He was preceded in death by his parents, his son Jeff Kangas on March 9, 2007, sister Barbara Clisch, nieces Deborah and Lori Ann Clisch and nephew Tom Kangas. Funeral services for Jim were held at 2 p.m., Wednesday, August 2, 2017 at the Reid Funeral Service and Chapel, L’Anse with Pastor Peter Suomela officiating. The family greeted friends at the funeral chapel on Wednesday from 12 pm until the time of the funeral service. Immediately following the funeral service, friends were invited to join the family for fellowship and a luncheon in the Harrington Gathering Room, located at the funeral chapel. Interment and military honors were conducted at the Evergreen Cemetery, L’Anse.

The family of James Kangas created this Life Tributes page to make it easy to share your memories.

Send flowers to the Kangas family.