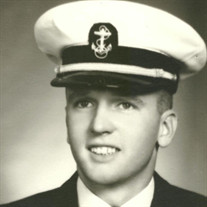 James (Jim) S. McPhillips age 86 of L'Anse MI, passed away at home on Thursday, July 23, 2020. He was born in Detroit MI on December 22, 1933 to Thomas and Ella (Morrison) McPhillips. Jim graduated from Pershing High School in Detroit in 1950 and enlisted in the Marine Corps. As part of his service, he studied at the Naval Academy. On August 24, 1957, he married Joan Bernatowicz of L'Anse. They moved to L'Anse in 1969 and remained together until her death in 2018. Jim was a part owner and operator of F & J Welders until he retired. He served on the L'Anse School Board and the L'Anse Township Board of Review. Jim was an avid golfer and was very involved in the L'Anse Golf Course in many capacities. He was a member of Scared Heart Parish and the American Legion. Jim is survived by his daughters Allison (Steve) Hein of Laurium, MI, Anne McPhillips (Bill Richards) of East Lansing, MI, Nancy McPhillips (Chuck Prohaska) of Warren, MI and Joan McPhillips (Rob Boyd) of Eden Prairie, MN, grandchildren Dan, Matt (Allie), Mike, Leah (Matt), Annette, Eleanor, Michelle (Diego), Ella and Mac; and great grandson Fletcher, brother Thomas (Margot) McPhillips of Oak Park, MI as well as numerous nieces and nephews. He was proceeded in death by his parents and his siblings Nancy, John, Patricia, Cecilia and brother in law Jim Meagher. Jim often remarked that “the smartest thing he did in his life was marry Joan.” They enjoyed a good life together for 61 years. He was a wonderful father who was very supportive of his daughters and raised them all to be smart avid readers like himself. He was a loving grandfather who enjoyed the company of his grandchildren. Jim always looked forward to his next round of golf, being able to savor a quality scotch, and tell a good story. He spent many happy years doing all three on a regular basis; often at the same time. To that end, he frequently traveled with his brother and friends to challenge some of the country’s best golf courses and collect new stories. His listening ear, eagerness to help, and great sense of humor, will be greatly missed by all. Funeral services for Jim will be held at 10:30 a.m. on Wednesday, July 29, 2020 at the Reid Funeral Service and Chapel, L'Anse with Deacon John Cadeau officiating. The family will greet friends at the funeral home on Wednesday from 9:30 a.m. until the time of the funeral service. Immediately following the funeral service, military honors and graveside services will be conducted at the L'Anse Evergreen Cemetery. In lieu of flowers, the family requests donations in honor of Jim be sent to L'Anse Public Library, 201 North Fourth Street L'Anse, MI 49946-1499 to help encourage a new generation of readers. The Reid Funeral Service and Chapel, L'Anse has been entrusted with the funeral arrangements.

James (Jim) S. McPhillips age 86 of L'Anse MI, passed away at home on Thursday, July 23, 2020. He was born in Detroit MI on December 22, 1933 to Thomas and Ella (Morrison) McPhillips. Jim graduated from Pershing High School in Detroit in 1950... View Obituary & Service Information

The family of James S. "Jim" McPhillips created this Life Tributes page to make it easy to share your memories.

Send flowers to the McPhillips family.