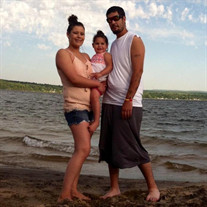 James Frederick “Jimmy” Shelifoe, Jr. age 23, of Baraga passed away Saturday, August 27, 2016 in Blaine, Minnesota as a result of a traffic accident. He along with other KBIC Beartown Firefighters were on their way to bravely help fight the Box Canyon wildfire in Utah. Jimmy was born in Hancock on September 30, 1992, the son of Sharon Kantola and James F. Shelifoe, Sr. He attended school in North Dakota. Jimmy had been a resident of the area for the past 5 years. He was a member of the Keweenaw Bay Indian Community. Jimmy had been with the KBIC Beartown Firefighters for a number of years and had also worked at Younggren’s in Covington. He enjoyed being outdoors, playing basketball, 4-wheeling, snowmobiling, riding his dirt bike and especially spending time with his family. Jimmy is survived by his loving family, mom Sharon (Charles) Sliger of Covington, father James F. Shelifoe, Sr of Baraga, MI, daughter Ciara Shelifoe of Baraga, fiancé Ivory Charging of Baraga, brothers Jordan Shelifoe of Baraga, Austin Shelifoe of Zeba, Javon Shelifoe of Baraga, sisters Virginia (Justin Hartzog) Shelifoe of Baraga, Jailyn Shelifoe of Baraga, grandparents Robert and Sandra Kantola of Fargo, North Dakota, Loren and Rose Kariainen of Covington, and niece Aubree Hartzog. Numerous aunts, uncles and cousins also survive. He was preceded in death by his grandmother Virginia Emery, his auntie Brigitte Shelifoe and his uncles Gerald Shelifoe, Frederick Shelifoe, Jr, and Allen Shelifoe. Traditional native services were held at 1 p.m. Wednesday, August 31, 2016 at KBIC Zeba Hall. The family greeted friends at the Zeba Hall on Wednesday, August 31, 2016 from 11 a.m. until the time of the service. Interment took place in the Pinery Cemetery. Following interment, friends were invited to join the family for fellowship and a luncheon at the Zeba Hall.

James Frederick &#8220;Jimmy&#8221; Shelifoe, Jr. age 23, of Baraga passed away Saturday, August 27, 2016 in Blaine, Minnesota as a result of a traffic accident. He along with other KBIC Beartown Firefighters were on their way to bravely help... View Obituary & Service Information

The family of James Frederick "Jimmy" Shelifoe Jr. created this Life Tributes page to make it easy to share your memories.

Send flowers to the Shelifoe family.