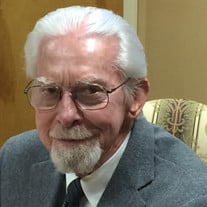 John L. “Jack” Reid, age 81, owner of the Reid Funeral Service and Chapel, L’Anse, passed away Friday, May 13, 2016 at his home with his loving wife Betty by his side. Jack was born in Niles, MI on May 18, 1934 the son of the late Robert C. and Hazel E. (Clendenen) Reid. Jack graduated from high school in Pontiac and then graduated from Wayne University, Dept. of Mortuary Science and served his residency in Pontiac, MI. He was co-owner of a funeral home in Oxford, MI. until he accepted a position with an international pharmaceutical firm and was promoted to national sales trainer and special representative for the United States. Prior to moving to the U.P., he was a supervisor and trainer for General Motors, returning to college to obtain an additional Bachelor of Science degree in Health Care Administration from University of Michigan. He served his health care internship at the Heritage Manor Nursing Home in Flint, MI. He married the former Elizabeth “Betty” Harrington in Pontiac, MI on May 18, 1973. A resident of the UP for over 30 years, Jack provided locum tenens manager coverage for over 25 funeral homes in the UP and Lower Michigan. He established the Reid Funeral Service and Chapel in 2000 to serve the greater Baraga County Area. Jack held mortuary science licenses in Michigan, Wisconsin, and North Carolina. Jack was a member of the National Funeral Directors Association, the Michigan Funeral Directors Association, and was a past president for the Upper Peninsula District 10. He was a member of the L'Anse Eagles Club, the Ottawa Sportsman’s Club and was a charter member and one of the founders of the Baraga County Chamber of Commerce where he served on the Board of Directors for three years. He was also a past board member of the Western U.P. Michigan Works Organization. On May 13, 2015, Jack was presented with a Sixty Year Licensee Award in recognition of sixty years of devotion to the funeral service profession and with deep appreciation for interest in and service to humanity on behalf of the Michigan Funeral Directors Association. His greatest satisfaction was helping families through the death experience and providing a positive viewing of their loved ones. Jack enjoyed nature, making wood and living in the woods at his home on the Silver River. Jack is survived by his wife Betty, children Jeff (Lora) Reid of Glendale, AZ, Scott A. (Rob Gibson) Reid of Scottsdale, AZ and Lisa A. (Douglas) Atkins of Danville, California, grandson Tyler Klein, step brother Richard Weldin, step sister Barbara Wagonsomer, sister-in-law Marian Reid, 3 nieces, 1 nephew, cousins Joan, Chuck, Mary Lou and special cousin Nancy. He was preceded in death by his parents, his 1st wife Nancy and his brother Robert Reid in 2012. Funeral services for Jack were held at 11 a.m. on Thursday, May 19, 2016 at the Reid Funeral Service and Chapel, L’Anse with Deacon John Cadeau, Pastor John Henry, Reverend Steve Rhoades, Pastor John Autio and Pastor Jerry Bishop officiating. The family greeted friends at the funeral chapel on Wednesday, May 18, 2016 for a celebration of Jack’s life from 6 p.m. until 8 p.m. and for one hour prior to the service on Thursday. Jack’s family had a luncheon in the Harrington Gathering Room, located at the funeral chapel immediately following the funeral service. Memorials in Jack’s honor may be directed to Mayo Clinic for cancer research or a charity of your choice. Envelopes are available at the funeral chapel. Interment took place in the L’Anse Evergreen Cemetery.

The family of John "Jack" L Reid created this Life Tributes page to make it easy to share your memories.

Send flowers to the Reid family.