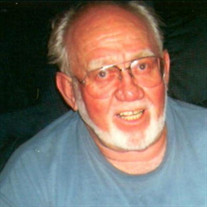 John Howard “Jergie” Jorgenson, age 85 of L’Anse, MI passed away Saturday, June 12, 2021 at Baraga County Memorial Hospital, L’Anse. He was born in Menominee, MI on April 6, 1936 the son of the late Howard and Hilda (Bauer) Jorgenson. John graduated from Menominee High School in 1953. He started his plumbing apprenticeship in May of 1956 in Menominee, working for various plumbing and heating companies. The year of 1975 he went to work for Gogebic Mechanical Inc, in Ironwood, MI and remained employed with them until retiring in 1998. He had worked in the trade for a total of 42 years. John had served his country in the United States Army in Germany from 1958 until 1960. He married the former Andrea G. Erickson on May 28, 1966. John was a member of United Lutheran Church, L’Anse and a 63-year member of the Plumbers and Pipefitter Local Union III. He enjoyed his job and all the people he worked with throughout the years. He also enjoyed hunting, fishing and his union breakfasts. John loved spending time with his grandchildren. John is survived by his loving wife Andrea G. Jorgenson, daughter Andrea Lynn (Chuck) Cavanaugh, and son Edward Jorgenson (Christy Jordan) all of L’Anse, daughter-in-law Sandy Jorgenson, grandchildren Jlyn Jorgenson, Alana Jorgenson, Landen Mattson, Emily Jorgenson, and Johnny Jorgenson, nieces Cathe (Chuck) Lindstrom, Gale (John) Schmitz, and Alice (Charles) Wajdak, and several cousins. He was preceded in death by his parents, and son’s John Marius and Eric Howard. Memorial funeral services for John will be held at 2 p.m. Thursday, June 17, 2021 at the Reid Funeral Service and Chapel, L’Anse with Pastor John Ansell officiating. The family will greet friends at the funeral home on Thursday from 1 p.m. until the time of the funeral service. Interment will take place in the L’Anse Evergreen Cemetery. John’s obituary may also be viewed and condolences sent to the family at www.reidfuneralservicechapel.com The Reid Funeral Service and Chapel, L’Anse, has been entrusted with the funeral arrangements.

The family of John Howard "Jergie" Jorgenson created this Life Tributes page to make it easy to share your memories.

Send flowers to the Jorgenson family.