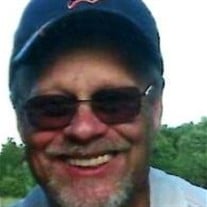 John Allan Liuska, Jr., age 54, of Keweenaw Bay, MI passed away Wednesday, February 13, 2019 at his home with his loving wife by his side. He was born in L’Anse, MI on October 23, 1964 the son of John Allan and Jean (Burke) Liuska, Sr. John graduated from L’Anse High School in 1982. He joined the US Army and proudly served his country. Following his honorable discharge from the Army he attended Northern Michigan University in Marquette, MI. John had worked for various construction companies as a superintendent and was a member of Carpenters Local 1510. He married his wife Wendy in L’Anse on November 17, 2014. John enjoyed golfing, fishing, hunting, berry picking with his family and helping people. John’s greatest accomplishment was raising their son David. John is survived by his loving family; wife Wendy Liuska and son David John Liuska of Keweenaw Bay, MI, father John Allan Liuska, Sr, of L’Anse, MI, sisters Camie Harding of Nisula and Stacy Liuska of L’Anse and mother-in-law Lorraine Maki of Hancock. Numerous aunts, uncles and cousins also survive. He was preceded in death by his mother Jean Liuska, infant sister Lori Ann Liuska, niece Leah Harding, father-in-law Raymond Maki and brother-in-law David Maki. Funeral services for John will be held at 11 am on Sunday, February 17, 2019 at the Reid Funeral Service and Chapel, L’Anse, MI with Deacon John Cadeau officiating. The family will greet friends at the funeral chapel on Sunday from 10:00 am until 10:45 am. Military honors, under the direction of the Baraga American Legion Post #444 will be conducted at the funeral chapel on Sunday at 10:45 am. Immediately following the funeral service, the family invites friends to join them for fellowship and a luncheon in the Harrington Gathering Room, located at the funeral chapel. Spring interment will take place in the Greenland Cemetery, Greenland, MI. The Reid Funeral Service and Chapel, L’Anse, MI has been entrusted with the funeral arrangements.

The family of John Allan Liuska Jr created this Life Tributes page to make it easy to share your memories.

Send flowers to the Liuska family.