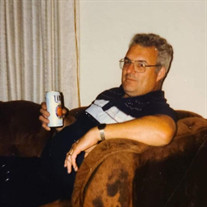 John H. Messer, Sr, age 77 of Baraga, MI passed away Wednesday, May 5, 2021 at Baraga County Memorial Hospital, L’Anse. He was born in L’Anse on October 14, 1943 the son of the late Ike and Cecelia (Roberts) Messer. John graduated from Baraga High School in 1961. He served in the United States Navy during the Vietnam Era. John married the former Lillian “Effie” Boodry in Baraga on October 17, 1966. She preceded him in death on June 5, 2019. John had been employed at the former Celotex Corp until his retirement in 2007. He was a member of St Ann’s Catholic Church, Baraga. John was an avid Green Bay Packer fan and enjoyed picking mushrooms, hunting and fishing. He loved going to watch the grandchildren and great grandchildren play sports. John liked to watch television and his favorite program was Oak Island and anything pertaining to Bigfoot. John is survived by his loving children Ann (Pat) Degenaer, Mary Messer, John Messer Jr. and Michael Messer Sr (Stacy Tikkanen) all of Baraga, grandchildren Brett, Jeffrey, John III, Lilianna, Jessica, Jenna, and Jacob (Amber), great grandchildren Trenton, Zachary, Jaxon, Blake, Aubrey, Alice and one on the way, brother James Cook of L’Anse, sisters Lorraine Trisch of Petoskey, MI and Mary Cook of North Carolina. Numerous nieces, nephews and cousins also survive. He was preceded in death by his parents, his wife, his grandson Michael Messer, Jr., sister Lucille Remnick, and brother and sister-in-law Donald and Linda Messer. Funeral services for John will be held at 12 p.m. Wednesday, May 12, 2021 at the Reid Funeral Service and Chapel, L’Anse with Father Corey Litzner officiating. The family will greet friends at the funeral home on Wednesday from 10:30 a.m. until the time of the funeral service. Due to the Covid-19 pandemic please wear a mask and abide by social distancing guidelines. Immediately following the funeral service, military honors under the direction of the Baraga American Legion Post #444 will be conducted graveside in the Assinins Cemetery, Assinins. John’s obituary may also be viewed and condolences sent to the family at www.reidfuneralservicechapel.com The Reid Funeral Service and Chapel, L’Anse has been entrusted with the funeral arrangements.

The family of John H. Messer Sr. created this Life Tributes page to make it easy to share your memories.

Send flowers to the Messer family.