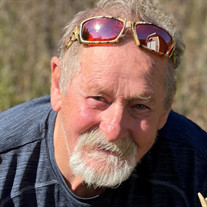 Joseph V. Grainger, age 69 of Baraga Michigan went to be with the Lord December 10, 2021. Joe was born February 9, 1952 in L’Anse Michigan to the late Don Stolp & Margaret Stolp. Joe served his country in the United States Army in Vietnam and was proud to be an American. He enjoyed working at A.0 Smith/Tower Automotive in Milwaukee, WI for over 31 years before retiring in 2003. Joe was married to the love of his life Pat for 49 years. His pride and joy were his family and he dedicated his life to being an amazing husband, dad, grandpa and great grandpa. Joe was an avid outdoors man. He loved hunting, fishing, camping, gardening, woodworking and anything else to do with God’s creation. He was a diehard Brewers & Packer fan & very rarely missed a game. He had a great sense of humor and was the life of the party. Joe was an amazing cook and loved to serve. He also made a mean cup of coffee. Joe is survived by his bride Patricia (Wickersham) Grainger, Children Brian (Crystal) Grainger, Deanna (George) Galloway, Krissi (Tony) Barachy, Grandchildren Austin Grainger, Sierra (Nathan) Sasaki, Madison Grainger, Tenley Pausch, Takoda Galloway, Great Grandchildren Ramona Grainger, Joshua Sasaki, Brothers Don Stolp Jr, Doug (Chrissie) Stolp, Dennis Stolp, Several Cousins, Nieces, Nephews, Aunts & Uncles also survive. He is preceded in death by his parents Don & Margaret Stolp, Brothers Bob Grainger & Daryl Stolp. A service to celebrate Joe’s life will be held at Reid Funeral Service and Chapel in L’Anse Michigan in spring or early summer of 2022. A date will be announced in the near future. Joe’s obituary may also be viewed and condolences sent to the family at www.reidfuneralservicechapel.com The Reid Funeral Service and Chapel, L’Anse has been entrusted with the arrangements.

Joseph V. Grainger, age 69 of Baraga Michigan went to be with the Lord December 10, 2021. Joe was born February 9, 1952 in L&#8217;Anse Michigan to the late Don Stolp & Margaret Stolp. Joe served his country in the United States Army in Vietnam... View Obituary & Service Information

The family of Joseph V. Grainger created this Life Tributes page to make it easy to share your memories.

Joseph V. Grainger, age 69 of Baraga Michigan went to be with...

Send flowers to the Grainger family.