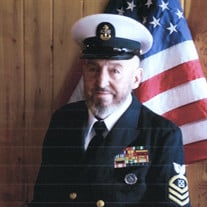 Joseph Zagar, BMC USN Ret. passed away Tuesday, December 8, 2015 at Jacobetti D J Home for Veterans in Marquette, he was 86 years old. Joseph was born in Painesdale on January 29, 1929, the son of the late Slavko and Mary (Krizmanich) Zagar. He graduated from Painesdale High School in 1948. Joe married the former Doreen Homier at Sacred Heart Catholic Church, L’Anse in 1955, and went on to active duty with the US Navy at Grosse Ile, Naval Air Station for many years and was stationed at Naval Air Station Seattle Washington and served in Vietnam with Task Force 116, Riv. Div 535. He was a chief in charge of several PBR boats. Joe was awarded the Purple Heart, Bronze Star w/combat V, Navy Commendation w/combat V. Vietnam service, Vietnam Campaign, V Gallantry Cross, and 7 Navy Good Conduct Medals along with pistol and rifle marksmanship ribbons. After his Vietnam service he served on Destroyer Escourts, the USS Evans and the USS Chandler. After his sea duty, he was stationed at Navy Station Alameda California, serving as Chief Master at Arms. He retired from Alameda and returned to Seattle, eventually returning to Michigan and he and Doreen made their home in L’Anse in 1977. Joe was member of Sacred Heart of Jesus Catholic Church, L’Anse, Knights of Columbus, Hancock Naval Reserve for many years, Fleet Reserve Association, Purple Heart Association in Iron Mountain, L’Anse American Legion Post #144, and the L’Anse VFW #3897, where he had served 2 terms as Commander. Joe was instrumental in getting the DAV van for the Copper Country and drove the van for several years and for several thousands of miles. Joe is survived by his loving wife of 60 years, Doreen, sisters Katherine “Dolly” Hawkins of California and Rose Hatala of Mohawk, several nieces and nephews and sister-in-law Marilyn (Marvin) Gauthier. He was preceded in death by his parents, his brothers John, Anton, Stephen and Slavko and his sisters Ann Hatala, Frances Rakich, Margaret Slomka and Lorraine Zagar. A Mass of Christian burial was celebrated at 11 a.m. Wednesday, December 16, 2015 at Sacred Heart of Jesus Catholic Church, L’Anse with Father Corey Litzner, celebrant. The family received friends at church on Wednesday from 10 a.m. until the time of the Mass. Military honors and a luncheon was held at the L’Anse American Legion Post #144 immediately following the Mass. Spring interment will take place in the L’Anse Evergreen Cemetery. Expressions of sympathy in Joe’s honor may be directed to Jacobetti D J Home for Veterans.

Joseph Zagar, BMC USN Ret. passed away Tuesday, December 8, 2015 at Jacobetti D J Home for Veterans in Marquette, he was 86 years old. Joseph was born in Painesdale on January 29, 1929, the son of the late Slavko and Mary (Krizmanich) Zagar.... View Obituary & Service Information

The family of Joseph Zagar created this Life Tributes page to make it easy to share your memories.

Send flowers to the Zagar family.