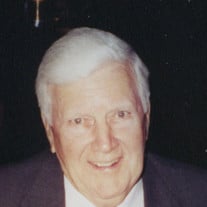 KENNETH M. WREN, 87, of L’Anse passed away Sunday, March 23, 2014 Bayside Village L’Anse following a lengthy illness. He was born in L’Anse on December 25, 1926, the son of the late Mills and Anna (Verbanac) Wren. Ken attended school in L’Anse. He served in the United States Army. Ken’s first wife Jeanette passed away in 1995. On February 7, 2004 he married the former Eva Miller in Mayville, WI. Ken was a foreman for the A.O. Smith Trucking Company until his retirement. He was a member of Sacred Heart Catholic Church. Ken enjoyed carpentry work, playing the stock market, traveling, hunting, fishing, and boating. Mr. Wren is survived by his loving wife Eva, daughters Dorene (James) Leichtle of New Berlin, WI, and Debra Herbeck of Germantown WI, stepchildren David Miller and his special friend Angela of L’Anse, Dan (Sandy) Miller of Marquette, Suzan (Lou) Troha of St. Charles, Missouri, and Pam (Don) Marple of Marquette, 15 grandchildren, 23 great grandchildren, brothers Donald Uren of L’Anse, and Gary (Christine) Uren of Baraga, and sister Sharon Drew and her special friend Stanley of L’Anse. Numerous nieces, nephews, and cousins also survive. He was preceded in death by his son Michael in 2004, and brothers Richard, and John. Funeral services for Mr. Wren were held at 1 p.m. on Wednesday, March 26, 2014 from the Reid Funeral Service and Chapel, L’Anse. Interment will take place in the L'Anse Evergreen Cemetery. The family greeted friends at the funeral chapel on Wednesday from 11 a.m. until the time of the service. Following the funeral service, the family invited friends to join them for fellowship and a luncheon in the Harrington Gathering Room, located at the funeral chapel.

The family of KENNETH M WREN created this Life Tributes page to make it easy to share your memories.