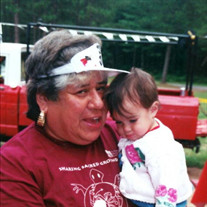 Karen R. Jacobson, age 81, of Sidnaw, MI passed away at her home on Saturday, October 17, 2020 surrounded by her loving family and friends. She was born on the Tuscarora Reservation in New York on November 17, 1938 and was the daughter of the late Clinton and Beulah (Mt Pleasant) Rickard. Karen graduated from Niagara Falls High School in 1957. She received her Bachelor Degree in 1961. Karen married Paul Jacobson in Torrance, California on September 10, 1972 and they moved to Sidnaw. Paul preceded her in death on September 6, 2015. Karen had been employed by L’Anse High School as the Art Teacher from 1982 until her retirement in 2003. She was a member of Bethany Lutheran Church, Covington and was a past president of the Covington PTO. Karen enjoyed visiting, her art, feeding the birds, gardening, flowers and spending time with her family. She was an incredibly dedicated wife and mother. Karen had a special way with so many people because she did not judge, and if she knew you, she was going to find something interesting and special about you and that's just how she was. She also had a way of building people up and bringing out the best in them and there was just something about her that mentioning her name still causes so many people to smile in a way that simply cannot be explained. Karen is survived by her loving children, Erik (Neeta) of Chassell, John of Baraga and Jenny (Will) Palmer of Grand Rapids, grandchildren Kayla, Quinten, Autumn, Paul, Shalan and Shania, grandson Carter Lee, sister Onalee (Russel) Cooper of New York, and numerous nieces, nephews, cousins and friends. She was preceded in death by her parents, her husband, brothers William, Clark, Norton, Eli, Charles, Leroy and Harold, and sisters Lois, Enid, Beverly and Edith. A graveside service will be held at 12 p.m., Saturday, June 19, 2021 in the Sidnaw Cemetery, Sidnaw, MI. The family invites friends to join them for fellowship and a luncheon at the Covington Multi-Purpose Building in Covington immediately following the graveside service. Karen’s obituary may also be viewed and condolences sent to the family at www.reidfuneralservicechapel.com The Reid Funeral Service and Chapel, L’Anse has been entrusted with the funeral arrangements.

Karen R. Jacobson, age 81, of Sidnaw, MI passed away at her home on Saturday, October 17, 2020 surrounded by her loving family and friends. She was born on the Tuscarora Reservation in New York on November 17, 1938 and was the daughter of the... View Obituary & Service Information

The family of Karen R. Jacobson created this Life Tributes page to make it easy to share your memories.

Send flowers to the Jacobson family.