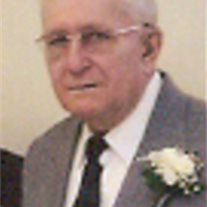 LEO P. MAJESKI, 82, of West Allis, WI. and a resident of Aura passed away Wednesday, May 20, 2009 at his residence in West Allis, WI., following a lengthy illness. He was born in Leona, WI. On March 3, 1927 the son of the late Alex and Josephine (Bryfczynski) Majeski. Leo attended school in Pequaming. He enlisted in the U.S Navy when he was 17. Leo was a boatswains mate aboard the USS Saratoga aircraft carrier when it was attacked by kamikaze pilots and bombed. He was wounded during the attack and awarded the Purple Heart and other citations. Leo married the former Laila Maki in Milwaukee on February 24, 1951. He went to work for the Pressed Steel Tank Company in West Allis, WI. He retired in 1989 after 40 years. He was proud of the fact that he had a perfect work record. Leo possessed a strong work ethic that he instilled in his family members. He was a member of the Aura Lutheran Church, the L'Anse American Legion Post 144, and a lifetime member of the D.A.V. Leo was an outdoors man, loved nature, wildlife and was an avid conservationist. Mr. Majeski is survived by his loving wife of 58 years, Laila, daughters, Marilyn Lange of Menomonee Falls, WI., Cheryl (Cal) Shoemake of Wauwatosa, WI., , Katheryn (Terry) Krupp of Mellen, WI., and Jodi (Vodie) Rhinehart of Milwaukee, grandchildren, Sean, Brett, Jeff, Jenny, and Jason, great grandchildren, Joey, Jaylynn, and Jordyn, brothers, Joseph (Marilyn) of Skanee, and Eugene (Irene) of Holt, MI., and sister, Eleanor Sikkala of Covington. Numerous nieces and nephews also survive. He was preceded in death by his siblings, Pat, Edward, Dorothy, and Alex Jr. Funeral services for Mr. Majeski were held at 2 p.m. Tuesday, May 26, 2009 at the Reid Funeral Service and Chapel, L'Anse with Pastor Scott Williams officiating. Mr. Majeski's grandsons and a great grandson honored him as casket bearers. The family received friends at the funeral chapel on Tuesday from 1 p.m. until the time of the service. Following the service a military graveside service was held at the Aura Cemetery at 3 p.m..

LEO P. MAJESKI, 82, of West Allis, WI. and a resident of Aura passed away Wednesday, May 20, 2009 at his residence in West Allis, WI., following a lengthy illness. He was born in Leona, WI. On March 3, 1927 the son of the late Alex and Josephine... View Obituary & Service Information

The family of LEO P. MAJESKI created this Life Tributes page to make it easy to share your memories.