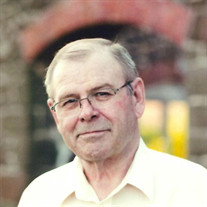 Louis A LeClaire age 69, of Alston, MI passed away Saturday, March 17, 2018 at Oscar G. Johnson VA Medical Center in Iron Mountain, MI. He was born in Hancock, MI on May 1, 1948 the son of the late Louis and Ethyl (Schumacher) LeClaire. Louis attended Sacred Heart Catholic School and graduated from L’anse High School in 1966. He then attendee diesel mechanic school in Alberta, MI. Louis married the former Carolyn Kyllonen on September 21, 1968 in L’Anse, MI. He served his country as a M.P. in the Army from 1968 to 1970 during which time he was stationed in Korea for a year. Louis was in the logging business for over 50 years. He and his wife Carolyn also raised beef cattle on their farm in Alston for many years. He was a man of integrity, known for his story telling and recall of history. He was a jack of all trades. One of the achievements he was building his garage along with his wife and son Brian from the lumber they harvested from their farm and all with the plans in his head. He enjoyed old country music and tinkering with all things mechanical. Louis was a member of the Kinnunen-Sutinen VFW Post #7646 of Alston, the Ottawa Sportsmen’s Club and a 3rd degree member of the Knights of Columbus. The thing he was the proudest of was his family. Louis is survived by his loving wife Carolyn, sons Steven (Cheryl) LeClaire of Dollar Bay, MI, Francis (Lisa) LeClaire of Bowling Green, KY and Brian (Tracy) LeClaire of Chassell, grandchildren Nicole (Brandon) Bell, Stephaine (Paul Thornton) LeClaire, Erica (Justin) Nicholas, Kyle LeClaire, Brendan LeClaire, Connor LeClaire and Leah LeClaire, great grandchildren Laila and Kingdon Bell, brother Paul (Ann) LeClaire, sisters Mary LeClaire and Nancy (Tim) McIntyre, aunts Lucille (Wes) Dollar and Kay (Tom) Gribble and numerous nieces, nephews and cousins. He was preceded in death by his parents and an infant baby brother. A memorial funeral service for Louis will be held at 1 p.m, Saturday, March 24, 2018 at the Reid Funeral Service and Chapel, L’Anse with Deacon John Cadeau officiating. The family will greet friends on Saturday from 11 am until the time of the funeral service. Baraga County area veterans, under the direction of the Baraga American Legion Post #444 will conduct military honors at the funeral chapel on Saturday at 12:30 p.m. Immediately following the funeral service, the family invites friends to join them for fellowship and a luncheon in the Harrington Gathering room, located at the funeral chapel. Spring interment will take place in the Alston Cemetery. The Reid Funeral Service and chapel, L'Anse has been entrusted with the funeral arrangements.

Louis A LeClaire age 69, of Alston, MI passed away Saturday, March 17, 2018 at Oscar G. Johnson VA Medical Center in Iron Mountain, MI. He was born in Hancock, MI on May 1, 1948 the son of the late Louis and Ethyl (Schumacher) LeClaire. Louis... View Obituary & Service Information

The family of Louis Albert LeClaire created this Life Tributes page to make it easy to share your memories.

Louis A LeClaire age 69, of Alston, MI passed away Saturday,...

Send flowers to the LeClaire family.