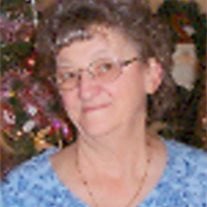 MARCELLA A. VADNAIS, 76, of Keweenaw Bay, passed away Friday June 19, 2009 afternoon at her daughter's home following a courageous battle with pulmonary fibrosis. Marcella was born December 1, 1932 in Baraga, the daughter of the late Ernest and Anna (Sterk) Kunick She was a lifetime resident of the area and attended the Baraga schools In 1950, she married John Weideman. She later married Bill Vadnais in Baraga on May 31, 1975. He preceded her in death February 1, 2005. Marcella was a member of St. Ann's Catholic Church in Baraga. She had worked as a waitress in local restaurants , and was employed in stores and motels. Above all, she was a devoted mother and grandmother. Marcella and her husband Bill were well known and fondly admired for their square dancing skills and the beautiful matching clothing she lovingly made for them both.. She enjoyed gardening, canning, sewing, watching game shows,playing cards, crossword puzzles, crocheting, and knitting (which was her passion). She donated hundreds of handmade items to the St. Bonaventure Eucharistic Mission Band in Detroit. Marcella is survived her loving daughter Susan (Wesley) Laitila of Keweenaw Bay,grandchildren Angel (Brian) Wadaga, of Baraga, Sarah (Joe) Laux, of Elo, David,(Ronda) Kunick of Riverdale, Utah, Bill (Kristine) Kunick of L'Anse, Tom (Simone) Kunick of Las Vega, Nevada, and numerous great-grandchildren, nieces and nephews, brother Ernest (Kathe) , sisters Virginia LaFernier, Frances Chartier, and Ann (Wayne) Swartz, all of Baraga. Marcella is also survived by 2 loving step-children, Mary (Joe) Glasson of Chassell, and Glenn (Marlene) Vadnais of Murphy, North Carolina, special niece, Maria Brady of Thorne Bay, Alaska and dear friends, Barbara and Raymond Brodbeck of Keweenaw Bay. She was preceded in death by a son, Dale, in 1996, sisters, Lucille, Ernestine, Marie, Shirley and June. Funeral services for Marcella were held Tuesday, June 23 2009 at 11 a.m. at the Reid Funeral Service and Chapel, L'Anse with Fr. Augustin George and Pastor Scott Williams, officiating. Interment took place in the Baraga Cemetery. The family greeted friends at the funeral chapel on Tuesday from 10 a.m. until the time of the service. Following the services, the family invited friends to join them for a luncheon and fellowship in the Harrington Gathering Room located at the funeral chapel.

MARCELLA A. VADNAIS, 76, of Keweenaw Bay, passed away Friday June 19, 2009 afternoon at her daughter's home following a courageous battle with pulmonary fibrosis. Marcella was born December 1, 1932 in Baraga, the daughter of the late Ernest... View Obituary & Service Information

The family of MARCELLA A. VADNAIS created this Life Tributes page to make it easy to share your memories.

MARCELLA A. VADNAIS, 76, of Keweenaw Bay, passed away Friday...

Send flowers to the VADNAIS family.