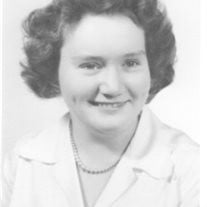 MARIE E. "NANNIE" SIKKILA, 74, of L'Anse, passed away Thursday, October 20, 2005 at Marquette General Hospital where she had been a patient. She was born in L'Anse, MI. on May 26, 1931 daughter of the late Kermit and Marie E. (Seavoy) Stein. Following the death of her mother, Marie was raised by her maternal grandparents, Edward & Sophie Seavoy. She attended L'Anse area schools and graduated in 1949. Marie then attended the former Suomi College and received her business degree in 1951. While at Suomi she traveled with the Suomi College Choir. On September 3, 1955 she married Bernhardt Sikkila at First Lutheran Church, L'Anse. He preceded her in death on January 2, 1980. Marie worked at the former Chevy garage, the County Court House and was a clerk for the L'Anse Sentinel for over 25 years, retiring in 1995. Marie was a member of United Lutheran Church, L'Anse, and past member of the church council, and church choir. She was also a member of LCW, Priscilla Circle, and sat on the L'Anse Library Board. Marie loved mystery novels and TV detective programs, doing crossword puzzles, singing, playing the piano and collecting old bottles, but most of all she loved being with her grandchildren. Mrs. Sikkila is survived by her loving children, Marie Lanczy of L'Anse, Mark Sikkila of DePere, WI., Michael Sikkila of West Allis, WI., and Marcia (Mike) Marinich of L'Anse, grandchildren, Katie, Zachary, Emily, and Abby, and brother, Louis Stein of Lower Michigan. A memorial service for Mrs. Sikkila was held at 7 p.m., Tuesday, October 25, 2005 from the United Lutheran Church, L'Anse with Pastor Scott Williams officiating. Interment tok place in the L'Anse Evergreen Cemetery. The family received friends at the church on Tuesday from 6 p.m until time of the service. Following the service friends were invited to join the family for fellowship and refreshments at the church. The Reid Funeral Service and Chapel, L'Anse has been entrusted with arrangements.

MARIE E. "NANNIE" SIKKILA, 74, of L'Anse, passed away Thursday, October 20, 2005 at Marquette General Hospital where she had been a patient. She was born in L'Anse, MI. on May 26, 1931 daughter of the late Kermit and Marie E. (Seavoy) Stein.... View Obituary & Service Information

The family of MARIE E. "NANNIE" SIKKILA created this Life Tributes page to make it easy to share your memories.