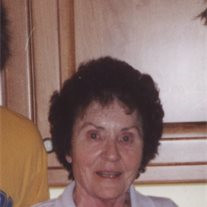 MARILYN JANE MC KINDLES, (nee Francois) passed away peacefully of complications related to a myocardial infarction June 5, 2012 at Baraga County Memorial Hospital in L'Anse, Michigan. She was born June 18,1932 in Marquette Michigan the daughter of the late Joseph Samuel and Gladys Elizabeth (VandeZande) Francois. Marilyn spent her childhood living in Pequaming, MI during the Henry Ford years while her father worked in management for Mr. Ford. Marilyn often reminisced fondly of her time growing up in Pequaming. Following the closing of the Pequaming Ford facility, Marilyn lived her teen years in L'Anse, MI next door to her future husband, Norman Donald McKindles Jr. During those years she was named Queen of the area's Strawberry Festival. She was a member of the cheerleading squad at L'Anse High School and graduated as part of the 1950 class. Her family then moved to Iron Mountain, MI during which time Marilyn worked in Chicago, IL as a Nanny at The Cradle, a child adoption organization. Following Norman's return from WWII, Marilyn married Norman Donald McKindles Jr. on May 15, 1954 at the Sacred Heart Catholic Church in L'Anse, Mi. Marilyn and Norman lived in L'Anse the majority of, and throughout the remainder of their married years. They maintained a loving home on Broad Street in L'Anse and were married almost 51 years until Norman's death on February 6, 2005. Marilyn's full-time job was that of raising their five children. She busied herself with meticulous house-keeping, daily baking and enjoyed square-dancing, reading, exercising, bird-watching, writing poetry, snowmobiling and in later years, picking up sticks and leaves from her yard on Broad Street. Marilyn spent many summers coordinating and preparing for the annual family reunion/vacation for her extended family at the McKindles' camp in Skanee, MI. One of Marilyn's hallmarks that will be missed most was her loving, rascally sense of humor. Marilyn now leaves her sons, Norman III (Doreen Buckovetz), Joseph (Maureen DeKeyser), Timothy (Ruth Murnane), Robert (Joann Pellizzer); her grandchildren Nathan & Mathew, Alicia Coron & Bruce Coron (step grandchildren); Ryan, Adam, Derek and Jessica; Glenn & Chuck Margewich (step-grandsons) Morgan & Alex; her siblings Kenneth, Phyllis (Santini), Richard , JoAnn (Michaud), Linda (Bastian), and many nieces and nephews. She now joins her husband, her daughter Heidi Sue (Sept. 12, 1996), and her parents. A Mass of Christian burial was celebrated at 11 a.m. on Saturday, June 9, 2012 from Sacred Heart Catholic Church, L'Anse with Father Antony Lukka, celebrant. Interment took place in the L'Anse Evergreen Cemetery. The family received friends on Friday, June 8, 2012 from 5 until 8 p.m. at the Reid Funeral Service and Chapel, L'Anse. A parish prayer service was held Friday evening in the funeral chapel at 7:30 p.m. Mom's boys would like to express their gratitude to Dr. Ingram and group, and to all BCMH staff for their treatment and care for Mom over the years. They will be forever thankful to Carol Seavoy, Marilyn's brother Richard and family, and the other friends and community members who provided care, companionship, assistance and kindness to Mom during her later years at home. They will be forever grateful to Pauline and the staff at Shulstad's Assisted Living, Baraga, MI for their support, solicitude, and solace for Mom during her final months.

The family of MARILYN J. MCKINDLES created this Life Tributes page to make it easy to share your memories.