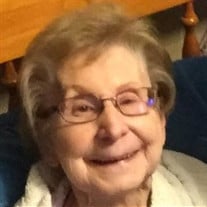 Mary Marcella “Marcy” Supanich, age 84, of L’Anse passed away Tuesday, November 28, 2017 at her home. She was surrounded by love! Marcy was born in Baraga on July 15, 1933. She was the daughter of the late Albert and Veronica “Verna” (Hebert) Ellenich. Marcy graduated from Baraga High School. She married Frank Mathew Supanich on Valentine’s Day, February 14, 1953. They shared 60 years of marriage until Frank passed away on July 6, 2013. Marcy was by his side. Marcy had worked at Community Action and at the former L’Anse Pharmacy as a sales clerk. She was a member of Sacred Heart Catholic Church, L’Anse. Marcy took pride in her appearance and had dressed from head to toe in coordinating jewelry to match her outfit of the day. She enjoyed her flowers, playing Bingo, going to the Casino, going with Frank to Houghton to shop and going to lunch at the Nite Owl. Her greatest love was her family and that’s all she wanted or needed to make her happy. Marcy is survived by her loving children, Deb (Dave) Perrow of L’Anse, Frank (Janet) Supanich of Tapiola and Dawn Supanich (Kevin Kalliainen) of L’Anse, her grandchildren Dave (Nicole), Adam (Ceiri), Frank (Kristi), Chad (Jessica), Amy (Gabe), Jennifer (Steve), Gary, Anthony (Alex), Allison and Morgan, great grandchildren, Brittny (Mike), Ryan, David, Zoe, Joselyn, Gracie, Frankie, Shantell, Keyshia, Quentin, Sam, Addison, Eli, Brynn and Scarlett, great great granddaughter Nina and daughter-in-law Kerrie. Numerous nieces, nephews, cousins and sisters-in-law and brothers-in-law also survive. She was preceded in death by her parents, husband Frank, children, Dale, Gary and Larry, granddaughter Tina, sister Doane and brother Sonny. A funeral service for Marcy was held at 12 pm, Friday, December 1, 2017 at the Reid Funeral Service and Chapel with Father Corey Litzner officiating. Family greeted friends at the funeral chapel on Friday from 11 a.m until the time of the service. Interment took place in the Evergreen Cemetery. The Reid Funeral Service and Chapel, L'Anse is in charge of the funeral arrangements.

The family of Mary Marcella "Marcy" Supanich created this Life Tributes page to make it easy to share your memories.

Send flowers to the Supanich family.