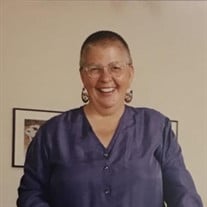 Mary Frances (Biekkola) Wright passed away on November 15, 2021 at the Bayside Village in L'Anse, where she had been a resident since 2019. She was born in L’Anse on January 25, 1941, the daughter of the late George Frederick (GF), Sr. and Julia Genevive (McNamara) Biekkola. She graduated from L’Anse High School in 1959 as Class President and after graduation, attended the College of St. Scholastica, University of Wisconsin, Madison and Northern Michigan University where she received a teaching degree and two Master’s Degrees. Mary was a teacher and principal in various communities, living as a nomad, from a log cabin in Trenary, then Marquette, Hancock, and back to L’Anse. Later in her life, she was very active with community art projects throughout the state. Mary received the Governor’s Arts Award in 1999. One of her largest projects was “Finn Fest USA” which celebrates Finnish culture. In 1996, over 3,000 painted chairs and seating of all kind were displayed in and around the Superior Dome in Marquette under her direction. She promoted chairs of all sizes and styles being painted by individuals in the traditional Finnish blue and white colors by offering work bees in many UP communities. Other projects included; Story Lines – Yoopera!, where family photos and stories were displayed on a cloth banner and hung on a clothesline, Heritage Poles displaying photos and stories lined the bike path in Marquette’s Mattson Lower Harbor for their Sesquicentennial Celebration, Grandma Doors, Decorative shovels lining M-28, Mitten Project in the Copper Country and lastly the Sunflower Project to celebrate women’s suffrage. Mary is survived by several nieces, nephews and cousins. She was preceded in death by her parents, sister Anna Mae (Bill) Johnson, brothers, George (Fred), Jr. and William Martin (Sandra) Biekkola. Graveside services for Mary will be held in the spring in the L'Anse Evergreen Cemetery. The date and time will be announced then. The family would like to thank everyone that so graciously contributed to Mary's funeral expenses.

The family of Mary F. Wright created this Life Tributes page to make it easy to share your memories.

Send flowers to the Wright family.