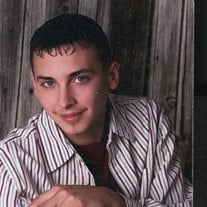 Michael T. Messer, Jr., age 25, of L’Anse passed away Thursday, December 10, 2015. Michael was born in Hancock, MI on January 15, 1990, the son of Chris and Tim Sanregret and Michael T. Messer, Sr. He graduated from L’Anse High School in 2009. Michael was a carpenter for KCO Construction. He was a member of Holy Name of Jesus Catholic Church, Assinins. Michael was an avid outdoors man. He loved hunting, fishing and outdoor activities. Michael is survived by his children Blake and Aubree Messer, the children's mother Angelica Bogda, Michael's mother and step-father Chris and Tim Sanregret of L’Anse, his father Michael T. Messer, Sr, of L’Anse, brothers Jacob Picard and Alec Sanregret both of L’Anse, grandparents Janet Tembreull of Baraga and John and Lillian Messer of Baraga and step grandparents Michael and Jeanene Sanregret of L’Anse. He was preceded in death by his grandfather James Tembreull Funeral services for Michael were held at 7 p.m., Monday, December 14, 2015 at the Reid Funeral Service and Chapel, L’Anse with Deacon John Cadeau officiating. The family greeted friends at the funeral chapel on Monday from 6 p.m. until the time of the service. Spring interment will take place in the L’Anse Evergreen Cemetery. Tuesday, December 15, 2015 friends were invited to the Baraga Ojibwa Senior Center at 2 p.m. for fellowship and a luncheon.

The family of Michael T Messer Jr. created this Life Tributes page to make it easy to share your memories.

Send flowers to the Messer family.