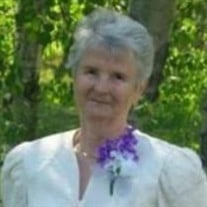 Nancy L. (Collins) Everson, age 82, of L'Anse, MI breathed her last breath in this world, hand in hand with her daughter, Deanna (Everson) Lindstrom at 1:30 a.m. on Friday, February 25, 2022 at Bayside Village, L'Anse, where she had been a resident since 2014. Her son, Mike, was by her side most of that day and Nancy's close family members were able to say their goodbyes earlier in the day also. Nancy endured a lengthy illness with Alzheimer's disease which sadly robbed her and her family of much joy many years before her body succumbed to it. Nancy was born in L'Anse, MI on July 10, 1939, the second child of nine to the late Homer and Dorothy (Glover) Collins. Nancy graduated from L'Anse High School in 1957. She married the late Ronald Everson in L'Anse on June 25th, 1958. He preceded her in death on May 31, 2015. Nancy was employed by Baraga County Memorial Hospital, L'Anse as a kitchen aide and in housekeeping until her retirement in 2000. Nancy happily chose retirement to be "Gramma/Nanny" to last "little" grandchildren, Kelsey and Nicholas for 6 years. She took so much joy in her "new job." Nancy's greatest love were her children and grandchildren. She rarely missed any of their sporting events. She was a truly selfless person with a heart of gold and was always there whenever anyone needed her. Nancy was a quiet soul and enjoyed many things that she didn't have to leave the comfort of her home for, such as gardening; her favorite flowers of all being her dahlias, knitting, crocheting and baking. She was known for her wonderful white and rye breads. For many years, Nancy knew the unconditional love of her fur baby Yorkshire Terrier, Tyson, who was her daily walking partner and lap companion. Nancy is survived by her loving children, Ronald Michael Everson (Mike) and his wife Rose and Deanna Lindstrom and her husband, Mark, L'Anse, grandchildren, Kaley, Sheena, Whitney, Cassidy, Kelsey, Nick, Cheyanne and Brendan, great grandchildren Adelyn, Eden, Mason, Averie, Oakley and Ronan, brother Scott (Cindy) Collins of L'Anse, sisters Luci (Dan) Dupras of Crystal Falls, MI, Christine (Joe) Brazeau of L'Anse, Geri Seavoy of L'Anse, Patti VanAbel (Bob Hollon) of L'Anse, and Laurie Collins of Oregon, and sister-in-law Mona Collins of Skanee. Numerous nieces, nephews and cousins also survive. She was preceded in death by her parents, her husband Ronald Everson, her son Rory Everson in 2015, brother Homer (Smokey) Collins and sister Sandy Hansen. Funeral services will be held at 7:00 p.m. Friday, March 4, 2022 at the Reid Funeral Service and Chapel, L'Anse with Pastor John Ansell officiating. The family will greet friends at the funeral chapel on Friday from 5:00 p.m. until the time of the funeral service. Nancy’s obituary may also be viewed and condolences sent to the family at www.reidfuneralservicechapel.com The Reid Funeral Service and Chapel has been entrusted with Nancy's funeral arrangements.

Nancy L. (Collins) Everson, age 82, of L'Anse, MI breathed her last breath in this world, hand in hand with her daughter, Deanna (Everson) Lindstrom at 1:30 a.m. on Friday, February 25, 2022 at Bayside Village, L'Anse, where she had been a resident... View Obituary & Service Information

The family of Nancy Louise Everson created this Life Tributes page to make it easy to share your memories.

Send flowers to the Everson family.