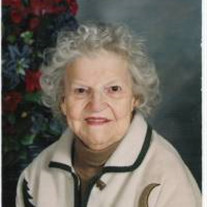 PHYLLIS ANN OLSON, 95, of L'Anse passed away Friday, September 16, 2005 at Bayside Village, L'Anse, following a lengthy illness. She was born in Baraga, MI. on June 21, 1910 daughter of the late Henry and Olevina (Foucault) Ross. Phyllis graduated from Baraga High School in 1927. She was employed by Harter's Store in Calumet, MI. On July 26, 1940 she married Leif Olson at St. Ann's Catholic Church, Baraga, MI. He preceded her in death on July 2, 1982. Phyllis was a member of St. Ann's Catholic Church. She loved her family and will be missed by many. Mrs. Olson is survived by her loving children, Jill (Jack) Lundgren, Mary (Robert) DesRochers, and Peter Olson all of Baraga, 11 grandchildren, 11 great-grandchildren, and a sister, Myrtle Maloney of L’Anse. She is also survived by numerous nieces and nephews. She was preceded in death by her son, Paul on November 8, 1998. A Mass of Christian Burial was celebrated at 11 a.m., Monday, September 19, 2005 from St. Ann's Catholic Church, Baraga with Father Augustin George as Celebrant. Family members honored her as casket bearers. Interment took place in the Baraga Cemetery. The family received friends on Monday at St. Ann's Catholic Church from 10 a.m. until time of the Mass. The Reid Funeral Service and Chapel, L'Anse has been entrusted with arrangements

The family of PHYLLIS A. OLSON created this Life Tributes page to make it easy to share your memories.

Send flowers to the A. OLSON family.