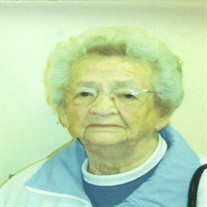 Patricia Ann Simonsen passed peacefully in her sleep on July 30, 2021 in L’Anse, MI. Over the course of her 94 years, Pat, as she was known by friends and family, wore many hats. Born Patricia Ann Poole in 1926 in Flint, MI, she married Andrew Simonsen in 1946, and settled in Mt. Morris, Michigan, where they raised three sons. In 1966 she received her high school diploma through the local adult education program, then earned her Bachelor’s Degree at the University of Michigan-Flint. Widowed in 1970, Pat took a job as an elementary teacher. After leaving teaching she worked as a church secretary, and became active in the local arts community. Pat was a talented painter and gardener. She moved to Ishpeming in 1985, and to L’Anse in 1999, to be nearer to family. She was an avid Detroit Tigers fan, and enjoyed watching tennis. Her grandchildren remember well that she baked delicious homemade mac ‘n cheese, Stromboli, and spinach roll, and every Christmas wars were fought over her homemade peanut butter balls. She loved reading mysteries, snuggling grand babies, and beating everyone at Scrabble. Pat is survived by her three sons, Doug (Cindy) Simonsen of Anacortes, WA, Randy (Betty) Simonsen of L’Anse, and Scott Simonsen of Boston, MA; grandchildren Bethany (Josh) Eshbach of Minneapolis, MN, Dave (Julie) Simonsen of Davison, MI, Steve (Stacey) Simonsen of Herman, MI, Ted Simonsen (Natasha Chopp) of Houghton, MI, Tom Simonsen of Dayton, WA, David (Ronnie) Smith of Salt Lake City, UT, Patrick Simonsen (Li Xing) of Seattle, WA, and Eric Simonsen of Bellingham, WA. She is also survived by eleven great grandchildren: Brad Simonsen; Isaac, Micah and Cohen Eshbach; Rebecca and Audrey Simonsen; A.J., Braylon and Tiana Simonsen; and Li Yiming and Cailean Simonsen. A memorial service will be planned at a later date with interment at Flint Memorial Park in Flint, MI. Patricia’s obituary may also be viewed and condolences sent to the family at www.reidfuneralservicechapel.com The Reid Funeral Service and Chapel, L’Anse has been entrusted with the funeral arrangements.

Patricia Ann Simonsen passed peacefully in her sleep on July 30, 2021 in L&#8217;Anse, MI. Over the course of her 94 years, Pat, as she was known by friends and family, wore many hats. Born Patricia Ann Poole in 1926 in Flint, MI, she married... View Obituary & Service Information

The family of Patricia Ann Simonsen created this Life Tributes page to make it easy to share your memories.

Patricia Ann Simonsen passed peacefully in her sleep on July...

Send flowers to the Simonsen family.