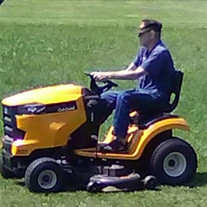 Paul J. Lahti, age 79, of L’Anse, MI passed away Monday, December 16, 2019 at his home. He was born in L’Anse on August 21, 1940 the son of the late Toivo and Stella (Vashaw) Lahti. Paul attended school in Baraga. He drove logging truck in his earlier years and retired from CCI. He was a member of Sacred Heart Catholic Church, L’Anse, the Keweenaw Bay Indian Community and the former Eagles Club. Paul had enjoyed going to the Eagles and the Jack O’Lantern for a beer and hunting. His favorite pass time was mowing his lawn. Paul is survived by his loving family, brother James “Jim” (Rhonda) Lahti of L’Anse, sister Elvera Lantz of L’Anse, nephews and nieces Jesse (Abby) Lahti of L’Anse, Malisha Maki of L’Anse, Mindy Lantz of Elo and Don (Karina) Lantz of Marquette, grand nieces and nephews Kaylee, Ty, Deegan, Talan, Miah, Megan, Anna, Emberlee, Donovyn, Larry and Aubreigh and his cousin Sharon Tammelin. Several close friends also survive. He was preceded in death by his parents. Graveside services for Paul will be held in the Assinins Cemetery in the spring Paul’s obituary may be viewed and condolences sent to the family at www.reidfuneralservicechapel.com The Reid Funeral Service and Chapel, L’Anse has been entrusted with the funeral arrangements.

The family of Paul J. Lahti created this Life Tributes page to make it easy to share your memories.

Send flowers to the Lahti family.