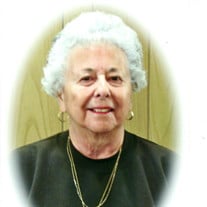 Pearl Nancy Rose Thoresen, age 85, of L’Anse, MI passed away peacefully with her family by her side on Thursday, February 8, 2018 at Baraga County Memorial Hospital, L’Anse. She was born in Zeba, MI on June 2, 1932, the daughter of the late John “Mickey” and Clara (Knapp) Swartz. Pearl graduated from L’Anse High School in 1950. She married Harold “Hellie” Thoresen on October 21, 1950 at Zeba Indian Mission United Methodist Church. He preceded her in death on July 25, 1993. Throughout Pearls career she had worked as a clerk for ITC, a cook at L’Anse Area Schools, a clerk at the former NorGas Company, a secretary for Michigan Inter-Tribal Education Association, Tribal Health Services, the Department of Health and Human Services and had retired in January 5, 1998 as administrative secretary for Keweenaw Bay Tribal Center. Pearl was a member of the Keweenaw Bay Indian Community, the Zeba Indian Mission United Methodist Church, Baragaland Senior Citizens and had been a member of the L’Anse Women’s Bowling League. She enjoyed reading, puzzles, being on her computer, feeding and watching the birds and deer, going to the casino, until recently she would go to the fitness center with her friends 3 times a week, loved listening to classic country music, attending her grandchildren and great grandchildren’s sporting events and playing cribbage with her brother Bill and friend Jane Elmblad. Pearl is survived by her loving children, Nancy (Jim) Shannon of Baraga, Jennifer (Jerry) Almli of Baraga, Steve Thoresen of New Prague, Minnesota, Julie Deschaine of Elkhart, Indiana and Harold (Jody) Thoresen of L’Anse, 9 grandchildren, 10 great grandchildren, 5 great-great grandchildren, brothers Bill Swartz of L’Anse, Ward (Nancy) Swartz of Millington, MI and Roland (Cheryl “Dodo”) Swartz of L’Anse, sister Amelia “Dolly” Sapcut of Baraga and numerous nieces, nephews and cousins. She is also survived by her best friend Connie Lytikainen of L’Anse. Pearl was preceded in death by her parents, her husband, her son Billy and brothers Wayne, Clyde and Jerry Swartz. A memorial funeral service for Pearl will be held on Monday, February 12, 2018 at the Zeba Indian Mission United Methodist Church in Zeba, MI with Reverend Steve Rhoades officiating. The family will receive friends at the church on Monday from 11 a.m until the time of the service. Immediately following the memorial funeral service, the family invites friends to join them for fellowship and a luncheon at the Zeba Hall. The Reid Funeral Service and Chapel, L’Anse, MI has been entrusted with the funeral arrangements.

The family of Pearl Nancy Rose Thoresen created this Life Tributes page to make it easy to share your memories.

Send flowers to the Thoresen family.