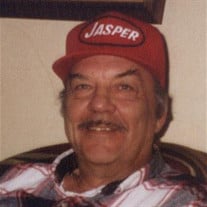 Peter G. Rajala, age 78, of Covington, Michigan passed away Thursday, February 23, 2017 at Baraga County Memorial Hospital, L’Anse, Michigan. He was born in Covington on April 30, 1938, the son of the late Alex N. and Vieno (Norback) Rajala. Peter graduated from L’Anse High School and then had served in the US Army. He married the former Helen Kanniainen on September 5, 1964 in Covington. She preceded him in death on September 20, 2012. Peter retired from CCI as a welder after 35 years of employment. He was a member of Covington Amvets, and Trinity Lutheran Church, Covington. Peter enjoyed hunting, fishing and watching the Tigers. Mr. Rajala is survived by his loving children, Jamie Rajala of Amasa and Debra (Tom) Magnuson of Alaska, grandchildren Alec, Kaia, Andy and Aren, brothers Jimmy (Mary) Rajala of Covington, Frank (Leona) Rajala of Covington and Paul Rajala of Covington, sisters Linda Holma of Houghton, Marcy (Dale) Collins of Covington and Gloria (Rudy) Franti of Ishpeming. Numerous nieces, nephews and cousins also survive. He was preceded in death by his son Mark, brothers Reino, Carl, Matt and John and sisters Alice, Helen and Mary. Funeral services for Mr. Rajala were held at 11 a.m. Wednesday, March 1, 2017 at Trinity Lutheran Church. Covington with Pastor Mark Reinsch officiating. The family received friends at the church on Tuesday, February 28, 2017 from 4 pm until 6 pm and on Wednesday from 10 am until the time of the funeral service. Immediately following the funeral service, friends were invited to join the family for fellowship and a luncheon at the church. Spring Interment will take place in the Covington Cemetery.

The family of Peter G Rajala created this Life Tributes page to make it easy to share your memories.

Send flowers to the Rajala family.