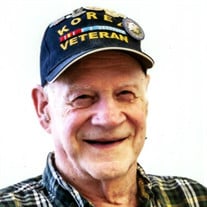 Philip M. Golden, age 86 of Marquette and L'Anse, MI passed away Sunday, November 28, 2021 at UP Health System, Marquette. He was born in L’Anse on July 29, 1935 the son of the late Arthur and Agnes (Chaudier) Golden. Philip attended L’Anse and Baraga area schools and received his GED while serving in the United States Army during the Korean War. Philip had been employed as a millwright for various construction companies and had also worked as a truck mechanic. He was a member of Sacred Heart Catholic Church, L’Anse, the American Legion and the NRA. Philip enjoyed hunting, fishing and going to the Nite Owl. Philip is survived by his loving daughters Cheryl (Anthony) Erikainen of Pelkie, Elaine (Brian) Thompson of Saginaw and Helen (Don) Lhamon of L’Anse, 7 grandchildren, 11 great grandchildren, 2 great great grandchildren, sister Anne Williams of L’Anse, and sister-in-law Loretta Golden of L’Anse. Numerous nieces, nephew and cousin also survive. He was preceded in death by his parents, his son Michael Golden, his grandson Michael Thompson, his brothers James, Everett, and Anthony, sister-in-law Shirley Golden and brother-in-law Bill Williams. Military honors and graveside services will be held at 10 a.m. on Friday, June 17, 2022 in the L’Anse Evergreen Cemetery. Immediately following the interment, the family invites friends to join them for fellowship and a luncheon in the Harrington Gathering room, located at the Reid Funeral Service and Chapel. Philip’s obituary may also be viewed and condolences sent to the family at www.reidfuneralservicechapel.com The Reid Funeral Service and Chapel, L'Anse has been entrusted with the funeral arrangements.

Philip M. Golden, age 86 of Marquette and L'Anse, MI passed away Sunday, November 28, 2021 at UP Health System, Marquette. He was born in L&#8217;Anse on July 29, 1935 the son of the late Arthur and Agnes (Chaudier) Golden. Philip attended... View Obituary & Service Information

The family of Philip M. Golden created this Life Tributes page to make it easy to share your memories.