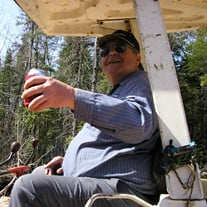 RICHARD J. USIMAKI, SR. age 72, of L’Anse, passed away suddenly Thursday, June 20, 2013 at Baraga County Memorial Hospital, L’Anse. He was born in Champion, MI on June 8, 1941 the son of the late Eino and Annie (Laitala) Usimaki. Richard attended school in Champion and graduated from L’Anse High School in 1958. He served in the U.S. Army. Richard married the former Nancy Sterbenz at Sacred Heart Catholic Church, L’Anse on September 4, 1965. He was an independent heavy equipment operator in the construction industry. Richard was a member of the NRA, L’Anse American Legion Post #144, and Local 324 Operating Engineers. Mr. Usimaki is survived by his loving wife, Nancy, sons Richard (Mary Lynn) Usimaki, Jr. of L’Anse, Jimmy (Karlee) Usimaki of Ishpeming, and Timmy (Christa) Usimaki of L’Anse, grandchildren Alyssa, Kyle, and Grace, and brother David Usimaki of Houston, TX. Funeral services for Mr. Usimaki were held at 11 a.m. on Monday, June 24, 2013 at the Reid Funeral Service and Chapel, L’Anse with Pastor Judy Matson officiating. The family greeted friends at the funeral chapel on Monday from 10 a.m. until the time of the funeral service. Military honors were conducted Monday at the funeral chapel under the direction of the Baraga American Legion Post #444 at 10:30 a.m. Following the services; the family invited friends to join them for fellowship and a luncheon in the Harrington Gathering Room, located at the funeral chapel.

The family of RICHARD J. USIMAKI created this Life Tributes page to make it easy to share your memories.

Send flowers to the USIMAKI family.