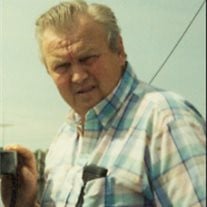 RODGER R. MIRON, 75, of Baraga passed away unexpectedly Tuesday, July 8, 2008 at his residence. He was born in Baraga on November 20, 1932 the son of the late Joseph and Alma (Anderson) Miron. Rodger was raised by the late John and Evelyn Anderson. He graduated from Baraga High School in 1950. Rodger served in the US Army during the Korean Conflict. He married the former Judy Geroux at the Assinins Church in 1962. She preceded him in death on November 14, 2003. Rodger was employed as a machinist for Selkey Manufacturing for 47 years, retiring in 1992. Rodger enjoyed fishing, hunting, gardening, working in the woods and making firewood. He was an avid Tigers fan. If he couldn't see the game on television he listened to it on the radio. Mr. Miron is survived by his loving children, Victor (Laura) Miron on Baraga, Kerri (Ed) Maki of Pelkie, Kimberly (Dean Hendrickson) Miron of Baraga, Shelly (Chris) Roy of L'Anse and Mary Moreno of Arizona, grandchildren, Crystal, Robert, Orlando, Michael, Kristine, Fud Bud, Calix, Adebria, Giovanni, Breanne, Mariah, and Annali, great grandchildren, Latoya, Mannie, Alex, and Reion, brother, Joseph Miron of Traverse City, and sister, Mary Francis LeClaire of Baraga. Numerous nieces and nephews and cousins also survive including his special niece Liz Selkey. He was preceded in death by a son, 5 brothers and 3 sisters in the Miron family and 4 sisters and 2 brothers in the Anderson family. The funeral service for Mr. Miron was held at 12 noon on Saturday, July 19, 2008 at the Reid Funeral Service and Chapel, L'Anse with Judy Mattson officiating. Interment took place in the Baraga Cemetery. The family received friends at the funeral chapel on Saturday from 11 a.m. until time of the service. Baraga County Area Veterans, under the direction of the Baraga American Legion Post 444 conducted military honors at the cemetery at 12:45 p.m. followed by a luncheon at the Baraga American Legion Post 444.

RODGER R. MIRON, 75, of Baraga passed away unexpectedly Tuesday, July 8, 2008 at his residence. He was born in Baraga on November 20, 1932 the son of the late Joseph and Alma (Anderson) Miron. Rodger was raised by the late John and Evelyn... View Obituary & Service Information

The family of RODGER R. MIRON created this Life Tributes page to make it easy to share your memories.