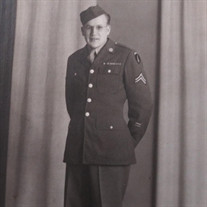 Reino W. Lahti, age 99, formerly of Summit, MI passed away Friday, April 16, 2021 at D. J. Jacobetti Home for Veterans in Marquette, MI. He was born in Summit on January 24, 1922, the son of the late Hugo and Elvira (Mannikko) Lahti. Reino was proud of his Finnish heritage. He attended school in Summit. He had often talked about being one of the last men from Herman to join the service. Reino served in the United States Army during World War II and was honorable discharge in 1946. In August of 1946, he married the former Aili Moilanen in Detroit, MI. Aili preceded him in death. Reino worked the family farm and logged until he was employed at the former Celetex Corporation in L’Anse. He retired after 19 ½ years. He was a lifetime member of the L’Anse VFW Post #3897. He loved making wood, his horses, and taking sauna. He made numerous handles for people for hammers, axes, and shovels. Reino had planted more than 5000 trees in his lifetime on the farm. Reino is survived by his loving daughter Sharon Tammelin of Herman, son William Arthur (Mary Ann) Lahti and family of Elo, grandchildren Jason (Jackie) Tammelin of Ishpeming and Jeremy Tammelin of Herman, his niece Elvera Lantz of L’Anse and nephew Jim (Rhonda) Lahti of L’Anse, and numerous cousins including Leonard (Carole) Mannikko of L’Anse and Raymond (Nancy) Mannikko of Herman. He was preceded in death by his parents, wife, brother Toivo, sister Helmi and nephew Paul. Baraga County Area Veterans will conduct military honors at 4 p.m. Friday, April 23, 2021 at the Herman Hall in Herman, MI. A luncheon will take place immediately following the military service at the hall. Interment will take place in the Herman Cemetery. Reino’s obituary may also be viewed and condolences sent to the family at www.reidfuneralservicechapel.com The Reid Funeral Service and Chapel, L’Anse has been entrusted with the funeral arrangements.

The family of Reino W. Lahti created this Life Tributes page to make it easy to share your memories.

Send flowers to the Lahti family.