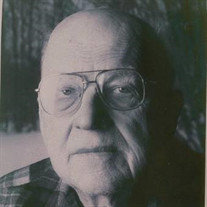 On Tuesday, September 12, 2017, Reuben G. Niemisto, born December 29, 1925, passed away peacefully at the DJ Jacobetti Home for Veterans in Marquette, after some months of failing health. Born in Pelkie Michigan on the farm at Pine Creek, he was the youngest son of Finnish immigrants Herman and Hannah (Mattson) Niemistö. He attended primary school at a little schoolhouse on Pine Creek Road, not far from the family homestead, and then was in the first class to matriculate from the newly built Pelkie Agricultural School. He graduated from Baraga High School. One memory he had from those years was taking violin lessons from the then very young music teacher Arthur Hill. He was still picking up the fiddle and playing some dance tunes a few years ago. On graduation he was called up for the Second World War, near its end, and was in the Navy SeaBees, building hospitals in Okinawa. After the war he married Margaret Sutinen, a South Range girl, and started farming and lumbering and bought the family farm. He continued this work, adding a sawmill and building a newly designed pole barn, until the 1970’s.His three children, Paul, Julie, and Patrick, all graduated from Baraga High School, during which time Reuben was the President of the Baraga Township School Board. He was particularly proud of having his signature on all of their diplomas. Reuben’s wife of 53 years, Margaret, passed away in 1999. In August of 2014 he married the former Gloria Kinnunen Leppanen. In later years he was in the insurance business and also became interested in the then newly developing Hanka Finnish Farm Homestead in Askel. He was the President of the Hanka Homestead Association for many years and continued to volunteer on a regular basis until he was unable. The Heikinpäivä committee in Hancock named Reuben Niemisto as the 2015 Hankooki Heikki for their annual celebration. Reuben, who observed his 91st birthday this past December with his wife, children, and grandchildren, had been an active life-long community volunteer. He was a charter member of the Pelkie Volunteer Fire Department, and a member of the Alston VFW #7646. He had lived in Pelkie, Michigan, almost his whole life. For those that knew him, Reuben was a keen observer of his surroundings and the people around him. He had a remarkable memory of the “old time” traditions going back to his childhood and was a great story-teller and humorist. He had an interest in Finnish and Copper Country culture and supported activities like Heikinpäivä and other such events. He spoke Finnish regularly with one of his only surviving contemporaries, Reino Lahti of Herman. He continued to keep his eyes and ears open on the world, though both senses had dimmed a bit. His tongue, however, remained sharp He is survived by his wife Gloria, children Paul and Patrick, step children Susan, Calvin Jr. and Jane, eight grandchildren, four great grandchildren and numerous step grandchildren and step great grandchildren. He was preceded in death by his 1st wife Margaret in 1999, his daughter Julie in 2004, and all six of his siblings, Ellen, Wesley, Sigrid, Hubert, Ruth, and Bertha Funeral services for Reuben were held at 1 p.m. Saturday, September 16, 2017 at Holy Cross Lutheran Church, Baraga. The family greeted friends at church on Saturday from 12 p.m. until the time of the funeral service. Military honors, under the direction of the Baraga American Legion Post #444 were conducted at church on Saturday at 12:30 p.m. A luncheon was held in the church hall immediately following the funeral service. Interment took place in the Pelkie Cemetery. A memorial celebration of Reuben’s life is scheduled for Saturday, October 14, at Mission United Lutheran Church in Pelkie, with his children, grandchildren, great grandchildren, nieces and nephews in attendance.

On Tuesday, September 12, 2017, Reuben G. Niemisto, born December 29, 1925, passed away peacefully at the DJ Jacobetti Home for Veterans in Marquette, after some months of failing health. Born in Pelkie Michigan on the farm at Pine Creek, he... View Obituary & Service Information

The family of Reuben G. Niemisto created this Life Tributes page to make it easy to share your memories.

Send flowers to the Niemisto family.