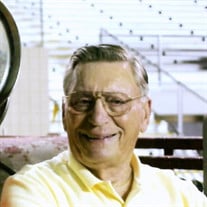 Richard A. “Dick” Gustafson, age 92, of L’Anse, MI passed away Wednesday, August 11, 2021 at Baraga County Memorial Hospital, L’Anse. He was born in Pequaming, MI on May 16, 1929 the son of the late Nels and Esther (Soli) Gustafson. Dick graduated from L’Anse High School and then enlisted in the United States Air Force during the Korean conflict and proudly served his country. Upon his honorable discharge from the Air Force, he attended Michigan Technological University. Dick married the former Shirley Pettersen in Florida in 1968. He had been employed with UPPCO as a shift engineer until 1990, retiring after 25 years. Dick was a member of United Lutheran Church, L’Anse, the L’Anse American Legion Post #144 and the L’Anse Masonic Lodge and Ahmed Shriners. He had served on the Township Board for 20 years and had also served on the Bay Ambulance Board for many years. Dick enjoyed all sports including hockey and had played football for Tech during his college years. He was an avid Green Bay Packer fan and had enjoyed hunting. Dick is survived by his loving wife Shirley, sons Robert “Bob” Gustafson of Denver, Colorado, and Richard Gustafson of Michigan, grandchildren Jeremy (Toni), Robert (Danielle) and Kyle, several great grandchildren and numerous nieces, nephews and cousins. He was preceded in death by his parents, his brother John Gustafson, and his son James Gustafson. A memorial funeral service will be held at 1 p.m. Friday, August 20, 2021 at the Reid Funeral Service and Chapel, L’Anse with Pastor John Ansell officiating. The family will greet friends at the funeral home on Friday from 11 a.m. until 12:30 p.m. A Masonic Memorial Service will be held at 12:30 p.m. followed by military honors, directed by the Baraga American Legion Post #444. Immediately following the memorial funeral service, the family invites friends to join them for fellowship and a luncheon at the L’Anse American Legion Post #144. Dick’s obituary may also be viewed and condolences for the family at www.reidfuneralservicechapel.com The Reid Funeral Service and Chapel, L’Anse has been entrusted with the funeral arrangements.

The family of Richard A. "Dick" Gustafson created this Life Tributes page to make it easy to share your memories.

Send flowers to the Gustafson family.