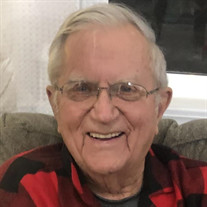 Richard C. “Dick” Utnehmer, age 92 of L’Anse, MI passed away Friday, January 7, 2022 with his loving family by his side. He was born in Antigo, WI on July 27, 1929 the son of the late Erwin and Ella (Bruening) Utnehmer. Dick graduated from Antigo High School in 1947. He proudly served with the military police in the United States Army during the Korean War. Dick married the former Lucille Tatro at St. Johns Church in Antigo on November 16, 1957. He worked in the grocery industry for many years and retired as a manager at Larry’s Market in Baraga, MI. In 2000 he began his career as a funeral and cremation service associate at the Reid Funeral Service and Chapel, L’Anse and remained an integral part of the funeral service until his passing. His quiet service to his community touched the lives of many. Dick enjoyed playing cards, woodworking, going to the casino and watching the Green Bay Packers. He was a devoted husband and family man. He loved spending time with his family and friends and always enjoyed having a good time. Dick was a man of upstanding principle and truly lived his life to the fullest until the very end. Dick is survived by his loving wife Lucille, daughters Anne Utnehmer of Hancock, MI, and Mary (Jerry) Sirard of L’Anse, grandchildren Jinny (Tyler) Sirard, Amber (Travis) Kaurala, Brooke Sirard (Michael Ostermeyer), Jill (Kyle) Wiseman, Whitney Sirard, Alix Tollefson and Dylan Tollefson (Jenna Heikkinen) great-grandchildren Bradley Simonsen, Ella, Noel and Miles Roy, Kaiden and Karson Kaurala, Carter and Theo Wiseman and Aria Romulus, brother William Utnehmer of Antigo, brothers and sisters-in-law, Jim and Midge Tatro, Carol Tatro, Suzie Schmutzer, Kathy and Tony Tillman, Mike and Pat Tatro and Bill and Diane Tatro. Numerous nieces, nephews, cousins and many friends also survive. He was preceded in death by his parents, his infant son Jason, sister Helene Utnehmer and brothers and sisters-in-law Colonel Gene Tatro, Mary and Jim Herbold, Rita Utnehmer and Laddie Schmutzer. A memorial funeral service will be held at 4 p.m. on Friday, January 28, 2022, at the Reid Funeral Service and Chapel, L'Anse, with Pastor John Ansell officiating. The family will greet friends at the funeral home on Friday from 2:30 p.m. until the time of the funeral service. Immediately following the funeral service, the family invites friends to join them for fellowship and a luncheon in the Harrington Gathering Room, located at the funeral home. Military honors, under the direction of the Baraga American Legion Post #444 and graveside services officiated by Pastor John Ansell will take place at 11:00 a.m.on Friday, June 3, 2022 in the L'Anse Evergreen Cemetery, L'Anse, MI. Dick’s obituary may also be viewed and condolences sent to the family at www.reidfuneralservicechapel.com The Reid Funeral Service and Chapel, L’Anse have been entrusted with the funeral arrangements.

The family of Richard C. "Dick" Utnehmer created this Life Tributes page to make it easy to share your memories.