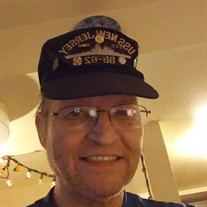 Robert W. Ahola, age 63, of L'Anse, MI passed away at his residence on Monday, February 14, 2022. He was born in L’Anse, MI on November 2, 1958, the son of the late Alvar and Lillian (Jackson) Ahola. Robert graduated from L’Anse High School in 1976. Following graduation, he proudly served his country in the United States Navy. Robert had worked in the construction industry as a mason-brick layer. He was a member of Trinity Lutheran Church, Covington, lifetime member of the Covington VFW #8945 and the L’Anse American Legion Post #144. Robert enjoyed watching television, driving his scooter in pleasant weather and he loved his cat “Milo”. Robert is survived by his loving family; brother Howard (Judi) Ahola of Chesapeake, Virginia, Linda (Jim) Dougovito of L’Anse, Lois Ahola of L’Anse, Alden (Laurie) Ahola of Watton, and Karl Ahola (Kerrie Dompier) of L’Anse, his uncle Roy (Mary) Norman of Watton, numerous nieces, nephews, great nieces and great nephews and a great great niece. He is also survived by his godchild Erik Santti. He was preceded in death by his parents. A memorial funeral service was held at 12 p.m. on Wednesday, February 23, 2022 at Trinity Lutheran Church, Covington with Vicar Corey Harman officiating. The family greeted friends at the church on Wednesday from 11 a.m. until the time of the funeral service. Immediately following the funeral service, a luncheon was held in the church hall. Military honors and interment will be conducted in the Covington Cemetery on Friday, June 10, 2022 at 12 p.m. Immediately following the services at the cemetery, the family invites friends to join them for fellowship and a luncheon at the Covington VFW Post #8945. Robert’s obituary may also be viewed and condolences sent to the family at www.reidfuneralservicechapel.com The Reid Funeral Service and Chapel, L’Anse has been entrusted with the funeral arrangements.

The family of Robert W. Ahola created this Life Tributes page to make it easy to share your memories.