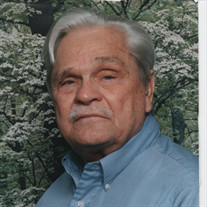 Robert Chapman, age 89, died peacefully on Saturday April 18 at The DJ Jacobetti Home for Veterans. He was born August 16, 1930 to Silas and Loaiza (Hudson) Chapman of Sidnaw, Michigan. He served in The U.S. Air Force during The Korean War. Several years ago, Robert had the privilege of participating in The Upper Peninsula Honor Flight. He was deeply moved by the experience. On November 17, 1969 Robert married the former Paula Ferrell. She died on September 11, 2004. Robert worked for the railroads where he was eventually promoted to conductor, a proud achievement. He resided in New Mexico for most of his adult life but chose to journey back to the Upper Peninsula in his later years to be near family and to see the family homestead in Sidnaw one last time. He lived in Escanaba, Michigan and attended Harbor Light Church of God, until his health began to fail him, and he required full time nursing care. Robert was a faithful believer in Jesus Christ. He had many loves including his family, fly fishing, The Detroit Tigers, and Gospel music. He especially loved listening to The Gaither's Vocal Band and The Jimmy Swaggart Singers. Robert always had a song in his heart. He also loved his service dog "Emma" who preceded him in death. While living, Emma went everywhere with Robert. She was his faithful companion for many years. Robert is survived by his daughter Melody (Jerry) Krogman from Nashville, Tennessee as well his grandchildren Sarah, Rachel, and Emiley. He is also survived by a step-daughter, Marlene Glasscock from El Paso, Texas. Among his other survivors are his nephew Bobby Murray of Marquette, Mi., Steve (Diane) Murray of Gladstone, Mi., Warren Murray of Toma, Wi., and a niece Marie (Jim) Tuck of Pooler, Georgia. He is also survived by many great nieces and nephews. He was preceded in death by his parents, his wife, and all his siblings. A private memorial service will be held at The Harbor Light Church of God in Escanaba, MI at a later date. Robert’s obituary may also be viewed and condolences sent to the family at www.reidfuneralservicechapel.com The Reid Funeral Service and Chapel, L'Anse, MI. is handling Robert's funeral arrangements.

Robert Chapman, age 89, died peacefully on Saturday April 18 at The DJ Jacobetti Home for Veterans. He was born August 16, 1930 to Silas and Loaiza (Hudson) Chapman of Sidnaw, Michigan. He served in The U.S. Air Force during The Korean War.... View Obituary & Service Information

The family of Robert Chapman created this Life Tributes page to make it easy to share your memories.

Send flowers to the Chapman family.