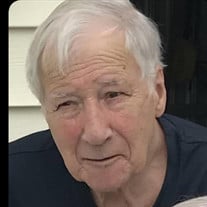 Robert Dean Kissel (1936-2022) With a twinkle in his eye, and a ready smile for all he met, Bob Kissel lived a full life. Born March 9, 1936, in Ashland, Ohio, he was the second of four children for Virgil and Blanche (Shibley) Kissel. The family moved to Munising when Bob was in the 9th grade and he graduated from Munising High School in 1955, where he played football and picked up the nickname “Mr. Touchdown”. Many of his high school football records still stand today. He attended NMU and served in the U.S. Army from 1958 until 1960. He married his first wife, Dorothy Lou Osterman, in 1960. They soon welcomed children Theodore (Ted) and Kerri. He joined in the family business, Kissel Chev & Olds in 1971, where he worked until his retirement in 1999. After Lou’s death in 1991, Bob found love again. He married Patricia (Pat) Funke, in 1992 and they enjoyed 29 years together. When he married Pat, Bob’s family grew to include her children, Jeanmarie, Kurt and Michele (Mickey) and their families. Bob loved them as his own. A convert to the Catholic Faith, Bob was an active member of St. Ann’s Church in Baraga. A loyal NASCAR and Packer’s fan, he loved puzzles, people watching, tending to his yard, time at camp with family and friends, road trips in the motor home and summers at Second Sand Beach. From 2009-2017, Bob traveled as jack-of-all trades for Croatian Village II, functioning as official chicken taster and after-hours bartender. Bob is survived by his devoted wife, Pat, children Kerri (Bill) Sikkila, Jeannie (Gary) Funke, Kurt (Brenda) Funke; eleven grandchildren, Zachary (Kristie) Kissel, Aleah (Mathew) Kissel, Carter Kissel, Bobbie Lou Sikkila, Aaron Copley, Estee (Issac) Preciado, Cassandra Cox, Nicholas Funke, Shannon Funke, Ryan (Lindsay) Martinac, Tyler (Katie) Martinac; eight great- grandchildren, Michael Rasanen, McKenna Rasanen, Aaron Copley, Jr., Jackson Preciado, Tyler Edwards, Brooklyn Martinac, Aria Martinac and Hayden Martinac; brother, Virgil (Kathy) and sister, Georgia (Chuck) Ramsay. Bob is also survived by daughter-in-law, Kristie Kissel, and son-in law, Steve Martinac, and numerous nieces and nephews. Bob was preceded in death by his parents, his brother, Ronald, son, Ted, and daughter, Mickey. Bob leaves behind many friends including his “Burger Crew.” He will be missed by so many. Visitation will be held Friday, March 4, 10:00 a.m. at St Ann’s Catholic Church, Baraga. Mass will begin at 11:00 a.m. with Father Corey Litzner, celebrant. Immediately following Mass, luncheon will be in the church basement. Spring interment and military honors will be held in the Baraga Cemetery. Please pray for the repose of Bob’s soul and give thanks that we knew and loved such a fine man. Bob’s obituary may also be viewed and condolences sent to the family at www.reidfuneralservicechapel.com The Reid Funeral Service and Chapel, L’Anse has been entrusted with the funeral arrangements.

Robert Dean Kissel (1936-2022) With a twinkle in his eye, and a ready smile for all he met, Bob Kissel lived a full life. Born March 9, 1936, in Ashland, Ohio, he was the second of four children for Virgil and Blanche (Shibley) Kissel. The... View Obituary & Service Information

The family of Robert D. "Bob" Kissel created this Life Tributes page to make it easy to share your memories.

Send flowers to the Kissel family.