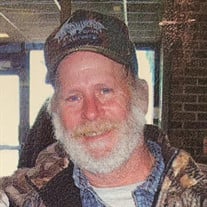 Robert L. “Bob” Laramore, age 66, of Elo, Michigan passed away Thursday, January 16, 2020 at Baraga County Memorial Hospital, L’Anse. He was born in Honolulu, Hawaii on July 15, 1953 the son of the late James and Inez (Dunn) Laramore. Bob graduated from high school in Oregon in 1961. He served the US Navy from 1972 until 1996. Bob married the former Donna Luoto in Virginia Beach, Virginia on August 30, 1974. He had been employed at Superior Tree Service as a landscaper until his retirement in 2013. Bob was a member and past commander of the Alston VFW Post 7646 and the Honor Guard. He enjoyed hunting, watching football and playing golf. Bob is survived by his loving wife of 45 years Donna, sons Joseph, Scott, Robert Jr. (Jenifer) and Adam, grandchildren Trenton, Kara, Colt, Natalie, Ione and Roslyn, great grandchild Iris, 1 brother and 1 sister. He was preceded in death by his parents and a brother. A memorial funeral service for Bob will be held at 1 p.m. Friday, January 24, 2020 at Grace Free Lutheran Church, Pelkie with Pastor Dave Hoskins officiating. Bob’s obituary may also be viewed and condolences sent to the family at www.reidfuneralservicechapel.com The Reid Funeral Service and Chapel, L’Anse has been entrusted with the funeral arrangements.

The family of Robert L. "Bob" Laramore created this Life Tributes page to make it easy to share your memories.

Send flowers to the Laramore family.