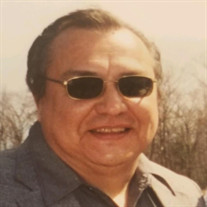 Robert L.“Beaver” Voakes, Sr. age 69 of L’Anse, MI passed away Wednesday, January 26, 2022 at UP Health System, Marquette, MI. He was born in Marquette on August 25, 1952 the son of the late Calvin and Annabelle (Misegan) Voakes and George and Alice Curtis. Beaver graduated from L’Anse High School. He received his auto body certification from Northern Michigan University. Beaver married the former Valerie Boyette in L’Anse on June 12, 1982. He had been employed at the former Celotex Corp, L’Anse as a line man and then the Ojibwa Housing Authority until his retirement. Beaver was a member of Most Holy Name of Jesus Catholic Church, Assinins, MI, the Keweenaw Bay Indian Community, and was a former KBIC tribal council member, Gold Star Family and was an active member of the Ojibwa Seniors. He enjoyed fishing, hunting, leather crafting, harvesting wild rice, watching documentaries, the Minnesota Vikings, traveling, especially on the senior trips, and construction. He could build anything and was a very multi-talented and artistic person. He had been a hands-on hockey dad for many years. Beaver loved spending time with his grandchildren and would do anything for them. Beaver was very proud of his 36-year sobriety. Beaver is survived by his loving wife Valerie, children Christopher (Kristin Sullivan) Voakes of L’Anse, Miranda (Jeremy) Forcia of L’Anse and Nancy (Doug Loosemore) Voakes of L’Anse, 12 grandchildren, 1 great grandchild on the way, brothers Jimmy M., Mike (Lynn Velmer) DeCota, Joel DeCota, David DeCota, Ronald (Annette Emery) DeCota, Jerry (Cindy) Curtis, sisters Sharon M. and Sandy Swartz, and aunt Patsy Hickman. Numerous nieces, nephews and cousins also survive. He was preceded in death by his parents, Calvin and Annabelle and Alice and George, brother Big Bob Curtis and sons SPC Robert L. Voakes, Jr., and Jeremy Voakes. Funeral services for Beaver will be held at 1 p.m. on Tuesday, February 1, 2022 at the Reid Funeral Service and Chapel, L’Anse with Father Corey Litzner and Paul Halverson officiating. The family will greet friends at the funeral home on Tuesday from 11 a.m. until the time of the funeral service. Immediately following the funeral service and traditional native drumming the family invites friends to join them for fellowship and a feast at the Zeba Hall, Zeba, MI. Spring interment will take place in the Pinery Cemetery, L’Anse. Beaver’s obituary may also be viewed and condolences sent to the family at www.reidfuneralservicechapell.com The Reid Funeral Service and Chapel, L’Anse has been entrusted with the funeral arrangements.

The family of Robert L. "Beaver" Voakes Sr created this Life Tributes page to make it easy to share your memories.

Send flowers to the Voakes family.