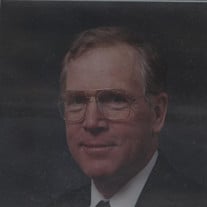 Baraga - Local Tree Farmer, Robert L. Wahmhoff, 78, of Baraga, passed away on Monday, December 5, 2016, at home following a lengthy illness. He was born on February 1, 1938 in Doster, Michigan, a son of the late Carl J. & Mildred (Hessling) Wahmhoff. On November 29, 1958, he was united in marriage to Maureen M. Cushman. While raising their 3 children, Robert and Maureen also cared for many foster children thru the years. Robert graduated from Michigan State University with a BS Degree in Agriculture. While living in Allegan Michigan, he farmed Christmas trees and was very active with the Allegan Community Players, who starred in numerous musicals: Guys & Dolls (Nathan Detroit), Fiddler on the Roof and more. In 1978, Robert and his wife, Maureen purchased a Christmas tree farm in Baraga and established Lake Superior Tree Farms. In 1980, they came to live in Baraga and built a life here. He served on the Board of Directors of Michigan Farm Bureau at the state level and county level for many years. On June 1, 2001, he was ordained a Deacon at St. Peter’s Cathedral in Marquette. He was active on the parish council and youth ministry for years and as a deacon, he did prison ministry. Preceding him in death were his parents; his brother, Father Andrew and sister, Joan. Surviving are Maureen, his wife of 58 years; his sons, Robert H. (Maggie) Wahmhoff and John Wahmhoff, and Daughter, Stephanie Wahmhoff; and Grandson, Christopher Wahmhoff; his siblings, Carl W. (Shirley) Wahmhoff, Marie Walker, Gerald (Fran) Wahmhoff, Ann (Butch) Clayton, Eleanor (Dan) Krezenski, Joseph (Linda) Wahmhoff, Lucy (Gerald) Remington, Rita Wahmhoff, Barbara (Bill) Maury, and numerous nieces, nephews, and cousins. A Mass of Christian Burial was celebrated at 11 a.m. on Friday, December 9, 2016 at St. Ann's Catholic Church, Baraga with Father Corey Litzner, celebrant. Deacon John Cadeau and Deacon Art Stancher assisted at Mass. The family greeted friends at the church on Friday from 9 a.m. until the time of the Mass. Immediately following Mass, a luncheon took place in the church hall.

The family of Deacon Robert L Wahmhoff created this Life Tributes page to make it easy to share your memories.

Send flowers to the Wahmhoff family.