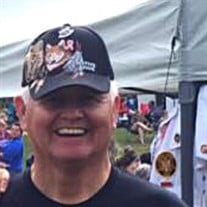 Roger Louis Bogda, age 71, of L’Anse entered into his eternal rest on August 22, 2015. He was born in Shawano, WI on May 21, 1944 the son of the late Jenny Pamonicutt and Louis Salzman. He was a member of the Menominee nation of Keshena, WI and was Wolf Clan. Roger served in the Army in Korea. He married the former Lois Crebessa in Milwaukee, WI on October 18, 1969. She preceded him in death on June 3, 2014. Roger was an active member of the KBIC Color Guard, A member of the Amvets and served as commander for many years. He also served as Commander of the VFW in L’Anse, MI. Roger was a Welding instructor at the KBOCC and L’Anse High School. Roger worked as a certified welder at AO Smith Co and Tower Automotive where he retired after 30 years and moved to L’Anse, MI with his wife. Roger enjoyed leather working, gunsmithing, woodworking, riding his tractor, and watching Heehaw, He loved Kit Kat candy bars, Pow Wows, traveling, laughing with his friends at the Ojibwa Seniors, and watchout when the snagging curl comes out, and traveling with his veteran brothers. Roger loved life and lived for helping others. His grandbabies were the apple of his eyes. He was survived by his daughter Cheryl Bogda of L’Anse, son Donald Bogda of Green Bay, WI grandchildren Leona Cardin, Melissa(Sean) Kruse, Angelica(Michael)Bogda, Cheyenne (Brandon) Crebessa, Samantha (Ronnie) Chagnon, Roger Crebessa, Roger(Katey)Bogda, Sierra Curtis, Jerry Crebessa, Louis Curtis Jr. great-grandchildren; Ella, Jordan, Avangelica, Blake, Matilda, Aubree, sisters; Rosemarie Tourtillot of Eagan, MN. and Beverly Merath of Green Bay, WI. Many nieces, cousins and great friends also survive. He was proceeded in death by his loving wife Lois Bogda, son Jerome Crebessa, mother Wilma Hafner, brother Donald Hafner, sister Mary Webster, nephews Thomas and Brian Webster and the rest of them that he loved dearly. Funeral services for Roger were held at 11 am Thursday, August 27, 2015 at the Reid Funeral Service and Chapel, L’Anse. The family greeted friends at the funeral chapel on Wednesday, August 26, 2015 from 6 until 8 p.m. and on Thursday from 10 a.m. until the time of the service. Interment took place immediately following the funeral service on Thursday in the L’Anse Evergreen Cemetery. Baraga County area veterans, under the direction of the Baraga American Legion Post #444 conducted graveside military honors. Following the interment friends were invited to join the family for fellowship and a luncheon at the Ojibwa Senior Center in Baraga.

Roger Louis Bogda, age 71, of L&#8217;Anse entered into his eternal rest on August 22, 2015. He was born in Shawano, WI on May 21, 1944 the son of the late Jenny Pamonicutt and Louis Salzman. He was a member of the Menominee nation of Keshena,... View Obituary & Service Information

The family of Roger L Bogda created this Life Tributes page to make it easy to share your memories.

Roger Louis Bogda, age 71, of L’Anse entered into his eternal...

Send flowers to the Bogda family.