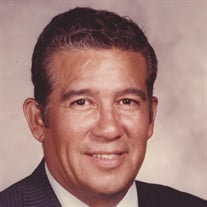 Roger F. “Duke” Duschene, age 82, of Baraga, passed away at his home with his loving family by his side on Thursday, August 24, 2017. Roger was born in Baraga on April 11, 1935 the son of the late George and Sarah (Shalifoe) Duschene He graduated from Baraga High School in 1953. Roger had served in the United States Air Force. He had been employed as a millwright until his retirement. Roger married the former Gloria Radke in Waukegan, Illinois on December 22, 1984. He was a member of St. Ann’s Catholic Church, Baraga and the Keweenaw Bay Indian Community. Roger had served on the Agriculture Committee for 8 years with the Keweenaw Bay Indian Community and had been an advisor for Baraga County Community. Roger was an avid Lions and Tigers fan and loved going to the casino to play Keno. Roger is survived by his loving wife Gloria of Baraga, daughters Judy (Jeff) Stark of Illinois and Jennifer Sasser of Louisiana, step children Jeffrey (Kim) Shumaker of Colorado, Douglas Shumaker of Illinois and Debra (Steve) Poffingbargar of Illinois, 5 grandchildren, 6 step grandchildren, 5 step great grandchildren, brothers George (Bernice) Deschaine of Baraga, Michael Duschene of Baraga, Russell (Dawn) Froberg of Illinois, and sister Mary (Bill) Brady of Illinois. Numerous nieces, nephews and cousins also survive. He was preceded in death by his parents and his sister Helen. A Memorial Mass was celebrated at St. Ann’s Catholic Church, Baraga at 11 a.m on Tuesday, August 29, 2017 with Father Corey Litzner, Celebrant. Immediately following the Mass, interment took place in the Baraga Cemetery. Friends were then invited to join the family for fellowship and luncheon in the church hall.

The family of Roger F. "Duke" Duschene created this Life Tributes page to make it easy to share your memories.

Send flowers to the Duschene family.