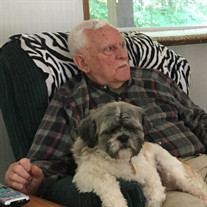 Roger F. Griffin, age 92 of L’Anse, MI, passed away at his home on Wednesday, April 29, 2020. He was born in Detroit, MI on November 21, 1927 the son of the late William and Marion (Crisp) Griffin. Roger graduated from Cooley High School in 1946. He married the former Helen G. Allen in Ohio on February 22, 1948. She preceded him in death on May 6, 2008. Roger had been employed as a meat cutter for A&P grocery stores for 43 years, retiring on March 21, 1989. Roger was a former member of the Red Wings Farm Team and enjoyed going to Bingo, fishing, taking rides and feeding the deer. Roger is survived by his children, Michael (Trudy) Griffin of Vero Beach, FL, Bruce Griffin of Aura, MI, Bill (Neena) Griffin of Clermont, FL, Laura Dault of L’Anse, MI, Tim (Carole) Griffin of Brighton, MI and Tamara (Steve) Still of Howell, MI, 12 grandchildren, Ann, Todd, Kathy, Chris, Jeremy, Nicholas, Amanda, Kimberly, Jeff, Brett, Scott, Sasha, 19 great grandchildren and many great-great grandchildren, numerous nieces and nephews, special friend Bernice Anderson and his best friend and loyal companion Tao. He was preceded in death by wife Helen, granddaughter Lynn, son-in-law John Dault and 5 brothers and sisters. Interment will take place on Friday, May 22, 2020 in Oakland Hills Memorial Gardens in Novi, MI. Memorials in Rogers honor may be directed to the Humane Society. Roger's obituary may also be viewed and condolences sent to the family at www.reidfuneralservicechapel.com The Reid Funeral Service and Chapel, L’Anse, MI has been entrusted with the funeral arrangements. On April 29, 2020, we lost an amazing man. His 92 years of life were filled with many accomplishments and experiences. His family was the most important part of his life. Throughout his high school years, he was very active in athletics. He held track records for years at his alma mater, Cooley High School in Detroit, where he lived out his childhood and early adulthood. He was good in all sports and spent many hours listening to Ernie Harwell on the radio calling play-by-plays of his beloved Detroit Tigers. He met our mom, the former Helen Allen, while working at A&P in Detroit. He married our mom in 1948 which began our family of six children: Michael, Bruce, Bill, Laura, Tim and Tammy. He worked at A&P in the meat department until he retired from there in 1989 after 43 years. With a carload of kids, we all spend Sunday afternoons picnicking at Kensington Park or just out in the country. Summer vacations were spent in the U.P. at a family cabin on a lake, and our later years were spent at our Dad’s favorite campground, Tepee Lake, south of our Mom’s hometown of Kenton. His favorite thing to do was fish. We have many memories of hearing his fishing boat being pushed into the water with his sons as his favorite fishing partners. Another favorite thing to do was to play football in the street with his sons, who often had their friends over. He also would make a skating rink in our backyard every year. He taught us to skate, and many nights after we went to bed, we could hear the water being turned on to put a fresh coat of ice on for the next day. When our mom ended up in the nursing home, he spent countless hours a day, everyday, with her. He would take her for walks in her wheelchair outside. Even in the winter, he would bundle her up and take her out. In the summer, he would take her out to sit with her under the tree by the courtyard so she could watch the birds. People still comment about how wonderful it was to see the love and care he gave her. She was his heart, and he missed her everyday after she passed on May 6, 2008. His battle with dementia took a lot of his memory, but whenever we took a ride to Kenton, he remembered her the best. He is going to be missed for the rest of our lives, but knowing he is once again with our mom is comforting beyond measure. Thank you for all your comforting words of support for the loss of our beloved Dad. • The Family of Roger Griffin.

The family of Roger F Griffin created this Life Tributes page to make it easy to share your memories.

Send flowers to the Grifffin family.