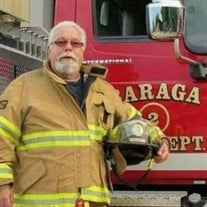 Ronald L. “Ron” Hueckstaedt, Jr. age 59 of Baraga, MI passed away Wednesday, July 15, 2020 at UP Health System, Marquette. Ron was born in Milwaukee, WI on November 22, 1960 the son of Ronald L.Hueckstaedt Sr. and Agnes “Totsie” (Crebessa) Hueckstaedt. He graduated from Milwaukee Lutheran High School in 1978. Ron worked for many years at The Ojibwa Casino as the security manager. He was a member of Keweenaw Bay Indian Community, Baraga Fire Department, an EMT for Bay Ambulance, as well as serving as a Board member. He enjoyed cooking, bowling on the Baraga Men's Bowling League, gardening, hunting, camping, "Missions" with his best friend Don Messer, volunteering his time for the community and was an avid Green Bay Packer fan. He loved playing “Santa” for years at the Baraga Fire Hall and Keweenaw Bay Indian Community. Ron loved spending time with his children, grandchildren and entire family. Ron is survived by his loving children Ronald L. Hueckstaedt, III (Hannah) and Amanda Hueckstaedt of Baraga, Laurie (Steve) Schultz of Las Vegas, NV, Ryan Freeman of Milwaukee, WI and Jesse Miller of Milwaukee, WI, mother Agnes “Totsie” Hueckstaedt, brother Daniel (Elizabeth) Hueckstaedt, sisters Eleanor (Charles) Miller and Kim (Jeffrey) Klopstein and his significant other Patty Menzl, grandchildren Brynlee, Alizah, Hayden, Sophia, Jacob and Reighlyn who is due in November. He is also survived by his special friends that were more like brothers to him, Richie Reed and Marc Trevisan both of Milwaukee, WI, Curtis Nieskes and Don Messer both of Baraga. He was preceded in death by his father Ronald Sr and his brother Gary. A celebration of Ron’s life will take place on Monday, July 20, 2020 at the Ojibwa Senior Citizens Ceremonial Room in Baraga from 1 p.m. until 2 p.m. Interment will then take place in the L’Anse Evergreen Cemetery. Immediately following the interment, friends are invited to join the family for a luncheon at the Ojibwa Senior Citizens Center, Baraga. Ron’s obituary may also be viewed and condolences sent to the family at www.reidfuneralservicechapel.com The Reid Funeral service and Chapel, L’Anse has been entrusted with the funeral arrangements.

The family of Ronald L. Hueckstaedt Jr. created this Life Tributes page to make it easy to share your memories.

Send flowers to the Hueckstaedt family.