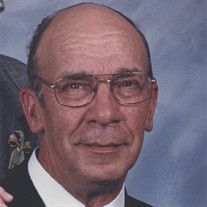 Ronald Moilanen, age 80, of Tapiola, MI. passed away Monday, April 27, 2015 at Bayside Village, L'Anse. Ron was born October 4, 1934 in Dearborn, MI., the son of the late Henry and Melida (Rutila ) Moilanen. Ron attended school in Pelkie and Baraga. On June 23, 1956 he married the former Elaine Koski in Pelkie. Ron was a self employed farmer, meat cutter and former mailman. Ron was a member of Mission United Lutheran Church, church council and was active in community affairs including membership in the Ottawa Sportsman Club, former chairman of the Baraga County Fair, Church council, a 4-H leader , Chairman of the Baraga County Republican Party, the NRA, and former chief of the Pelkie Fire Department, and the Soil Conservation Department Ron was also awarded the first Citizen of the year for the county. Among his other talents, he was a licensed pilot. Ron is survived by his loving wife, Elaine, children Gale (Michel) Kocher of Mass City, and Sandra (Jerome) Johnson of Rabbit Bay, grandchildren Christopher, Stefanie, Marhew, Erik, Jesse, and Kendal., great-grandchildren Dalton and Kenson His brother Paul (Betty) Moilanen of Orangeburg, SC also survives along with numerous nieces, nephews, and other family members. He was preceded in death by 3 infants and sister Karen Services for Mr. Moilanen were held Thursday, April 30, 2015 at 11 a.m. from the Mission United Lutheran Church, Pelkie with Pastor John Autio officiating. Interment took place in the Pelkie Cemetery. Friends called Wednesday , April 29th from 6 until 8 p.m. at the church and for one hour before the service on Thursday

The family of Ronald H Moilanen created this Life Tributes page to make it easy to share your memories.

Send flowers to the Moilanen family.