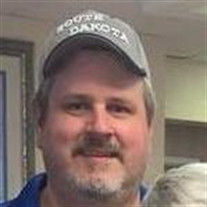 Rory L. Everson, 45, of L’Anse, passed away peacefully, surrounded by family members on December 18, 2015. Rory was born in L’Anse to Nancy (Collins) Everson and Ronald Everson on September 17, 1970. He attended L’Anse Area Schools and graduated in 1988. Rory worked at several area businesses over the years. Two of the greatest blessings in Rory’s life were the children he cherished; Cheyanne, the girl he adored as his own, and Brendan, his very best friend. His love for is entire family and friends was evident. He was always present and happy to be at family gatherings, and would do anything he could to help anyone in their time of need. Rory moved himself and Brendan into the family home when his father’s health was failing, and cared for him to the very end. Rory’s giving spirit shone brightly to the end as his final wish was to donate his organs so that others could receive the gift of life. Unfortunately the chain of events leading up to Rory’s passing prevented this process, for the most part. However, many people benefited from the gift of sight that Rory was able to share. Rory loved music and movies. He played the guitar and could always name the artist or group from any song thrown at him, as well as recite phrases from any movie named or list actors who starred in them. He had a great sense of humor and loved to make people laugh. Rory loved sports. He was an avid Detroit Lions and Red Wings fan. He was also active in assisting with coaching area youth football and hockey teams, including his son’s football team. Rory is survived by his children; Cheyanne Maki, 20, of Harvey, MI and Brendan Everson, 15, of L’Anse, his mother Nancy Everson of L’Anse, two siblings Ronald M. (Rose) Everson of L’Anse and Deanna (Mark) Lindstrom of L’Anse, a grandson, Mason, 3, of Harvey, MI, nieces and nephews Kaley Lein, Sheena Everson, Whitney Everson, Cassidy Everson, Kelsey Lindstrom, and Nick Lindstrom, and numerous aunts, uncles and cousins. He also leaves behind a special friend in his life, Keri Grafton Williams. Rory was preceded in death by his father, Ronald Everson just this past summer and also by all of his grandparents. A memorial funeral service for Rory was held at 3 p.m., Tuesday, December 29, 2015 at the Reid Funeral Service and Chapel, L’Anse with Pastor Peter Suomela officiating. The family greeted friends at the funeral chapel on Tuesday from 2 p.m. until the time of the memorial service. Immediately following the memorial funeral service, friends were nvited to join the family at the L’Anse Eagles Club for a benefit dinner for Rory from 4 p.m. until 7 p.m.

The family of Rory L Everson created this Life Tributes page to make it easy to share your memories.

Send flowers to the Everson family.