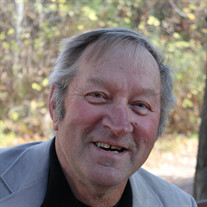 Rudolph L. “Rudy” Kauranen, age 72, of Watton passed away surrounded by his loving family at Baraga County Memorial Hospital, L’Anse on Friday, August 19, 2016. Rudy was born in Marquette on June 13, 1944 the son of the late Jalmer and Viena (Korpi) Kauranen. He attended school in Watton and graduated from L’Anse High School in 1962. Rudy married the former Elizabeth Cloutier in Detroit on June 12, 1965. He had worked as an electrician. Rudy was a member of Trinity Lutheran Church, Covington and had served on the church council, Covington Historical Society, PAC, Covington Fire Department, Covington Township Board of Review. He had also been the electrical inspector for Covington, Standard, Duncan, Matchwood and Interior Townships. Rudy enjoyed hunting, fishing, helping others, going for rides on his side by side and coffee clutching. He was an active volunteer for many organizations. In his earlier years he enjoyed playing soft ball and continued supporting the local teams. Mr. Kauranen is survived by his loving family; wife Elizabeth, children Lisa (Jon) Tarvainen of Watton, Lee (Donna) Kauranen of Boyne City, MI and Kimberly (David Rajala) Kauranen of Elmira, MI. grandchildren Kayla, Kortney, Austin and Korri, brothers Melvin (Carol) Kauranen of Covington and David (Karen) Kauranen of Watton, sisters, Elsa (Albert) Clement of L’Anse and Elizabeth (Ralph) Bischof of Watton. Several nieces, nephews and cousins also survive. He was preceded in death by his parents and sister Gloria Baril. A memorial funeral service was held at 1 p.m., Monday, August 22, 2016 at Trinity Lutheran Church, Covington with Pastor Mark Reinsch officiating. The family greeted friends at the church on Monday from 11 a.m. until the time of the memorial service. Immediately following the memorial service, interment took place in the Covington Cemetery. Friends were invited to join the family for fellowship and a luncheon at the church.

The family of Rudolph L. "Rudy" Kauranen created this Life Tributes page to make it easy to share your memories.

Send flowers to the Kauranen family.