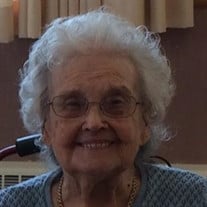 Ruth Ilona (Kangas) Connor, age 90, of L'Anse, passed away Friday, June 23, 2017 at Bayside Village, L'Anse. She was born in Wakefield, Michigan on February 12, 1927, the daughter of the late John and Ella (Linn) Kangas. She attended school in Wakefield and graduated in 1944. Ruth then went to Portland, OR and worked as a welder in a shipyard earning money for college. She returned to Michigan and attended Northern Michigan College, graduating with a degree in Early Elementary Education. Ruth substituted in many schools before accepting a position in the L’Anse Elementary School, where she taught for 29 years. Ruth married Michael T. Connor, Jr in 1948. They enjoyed traveling and would spend vacations traveling throughout the US, visiting all 50 states with ventures into Canada and Mexico. Once they retired, they were able to spend winters in Florida. They did this for over 20 years, before settling back full-time in L’Anse. In earlier years Ruth and Mike enjoyed Square Dancing and were charter members of the L’Anse Red Rockers Square Dance Club. Ruth golfed with the Women’s League, but in her later years traded her golf clubs for a bowling ball to bowl with the Senior Citizens. Ruth was an active member of United Lutheran Church, serving on the Church Council as well as teaching both Sunday School and Vacation Bible School for many years. She was also active in the Lutheran Church Women and Martha Circle, often serving as leader. In addition to her church activities, she was a member of the local chapter of MARSP. Ruth enjoyed working puzzles, doing crafts and reading. Mrs. Connor is survived by her loving family, son Dr. Michael (Michelle) Connor of Escanaba and daughter Ruth Anne Connor of L’Anse, sister June Whitley of Wakefield, brothers John Kangas of Salem, OR and Richard William (Ann) Kangas of Grayslake, IL. Numerous nieces, nephews and cousins also survive. She was preceded in death by her parents, her husband, sister-in-law Margaret and brother-in-law Marco. Funeral services for Mrs. Connor were held at 1 p.m. Friday, June 30, 2017 at United Lutheran Church, L’Anse with Pastor John Ansell officiating. The family greeted friends at the church on Friday from 11 a.m. until the time of the service. Immediately following the funeral service, interment took place in the L’Anse Evergreen Cemetery. Luncheon was served in the church hall following the interment. In lieu of flowers, the family suggests memorials in Mrs. Connors honor to be directed to United Lutheran Church Window Fund or Bayside Village.

Ruth Ilona (Kangas) Connor, age 90, of L'Anse, passed away Friday, June 23, 2017 at Bayside Village, L'Anse. She was born in Wakefield, Michigan on February 12, 1927, the daughter of the late John and Ella (Linn) Kangas. She attended school... View Obituary & Service Information

The family of Ruth I Connor created this Life Tributes page to make it easy to share your memories.

Send flowers to the Connor family.