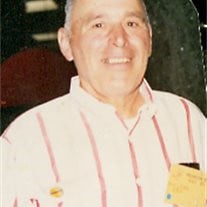 SAMUEL M. McCLUNG, 85, of L'Anse and formerly of the Pelkie, Alston area, passed away Monday evening January 19, 2009 at Bayside Village where he was a resident patient for over a year. He was born in Marion, MI. on September 14, 1923 the son of the late Frank and Lena (Gipp) McClung. Sam graduated from Marion High School in 1941. During WWII he was a captain in the US Army Air Corp flying as co-pilot aboard a B-24 Bomber on 36 missions. Sam married his first wife Marion in 1946, she preceded him in death in 1981. In 1983 he married the former Bertha Mutkala in Alston. He owned and operated his own dairy farm from 1946 until his retirement in 1984. Sam was a member of Gospel Hall, Pelkie where he served as Elder. He was also a member of Alston VFW Post 7646. Following his military service Sam was a flight instructor providing local flying lessons and enjoyed gardening, reading, and traveling. Mr. McClung is survived by his loving wife, Bertha, children, Raymond (Evelyn) McClung of Mass City, Carolyn (Marshall) Kuivinen of Alston, and step son, Sam Wolfe of Pelkie, grandchildren, James, Martin, Jason, Clinton, Conrad, Grayson, and Jonas, and brother, James (Ruth) McClung of Marion, MI. Numerous nieces, and nephews also survive. He was preceded in death by a brother and a sister. Funeral services for Mr. McClung were held at 2 p.m. Saturday, January 24, 2009 at the Reid Funeral Service and Chapel, L'Anse with Johnathon Brower officiating. Spring interment will take place in the Alston Cemetery. The family received friends at the funeral chapel on Saturday from 1 p.m. until the time of the service. Baraga county area veterans, under the direction of the Baraga American Legion Post 444 conducted military honors at 1:30 p.m. Following the services, the family invited friends to join them for fellowship and a luncheon in the Harrington Gathering Room, located at the funeral home.

SAMUEL M. McCLUNG, 85, of L'Anse and formerly of the Pelkie, Alston area, passed away Monday evening January 19, 2009 at Bayside Village where he was a resident patient for over a year. He was born in Marion, MI. on September 14, 1923 the son... View Obituary & Service Information

The family of SAMUEL M. McCLUNG created this Life Tributes page to make it easy to share your memories.