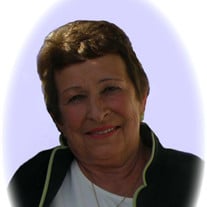 SHARON ANNE MATTSON, 72, of L’Anse, MI. passed away Sunday, November 28, 2010 at Marquette General Hospital, following a lengthy illness. She was born in Ewen, MI. on August 26, 1938 the daughter of the late Ervin and Gladys (Sain) Kasper. Sharon graduated from Bergland High School in 1956. She married James Mattson in Bergland on August 28, 1981. Sharon worked for several years at the A. O. Smith Company, Milwaukee, and the White Pine Copper Co. She was a waitress for several restaurants in the Bergland area, and was employed as secretary for the Ontonagon Intermediate School District. Moving to L’Anse, Sharon was employed at the former Montgomery Ward Store, the L’Anse Sentinel office, and the Pettibone and Celotex companies. Most recently, she was cashier at the Hilltop Restaurant and retired in 2009. Sharon was a member of United Lutheran Church, L’Anse, She enjoyed league bowling, fishing, hunting, and spending time at their cabin in Bergland. Sharon loved her family, trips to Las Vegas and her dogs. Mrs. Mattson is survived by her loving husband James Mattson of L’Anse, children Kenneth G. (Mitzi) Grant of Waunakee, WI. and Jim (Karen) Grant of Rhinelander, WI., step children James Jr. (Rhonda) Mattson of Eau Claire, WI., Mary J. Fish of Marquette, JoEllen (Harold) Thoresen of L’Anse, Michael E. (Jennifer) Mattson of Greenville, WI. and Mark A. Mattson of Traverse City, 11 grandchildren, 9 great grandchildren, and sister Margaret (Don) Leffel of Marquette. She was preceded in death by her brother, and mother-in-law Margaret McKenney in 2002 A memorial service for Mrs. Mattson was held at 11 am, Friday, December 3, 2010 from United Lutheran Church, L’Anse with Pastor Judy Mattson officiating. The family received friends at the church on Friday from 10 am until the time of the service.

SHARON ANNE MATTSON, 72, of L&#8217;Anse, MI. passed away Sunday, November 28, 2010 at Marquette General Hospital, following a lengthy illness. She was born in Ewen, MI. on August 26, 1938 the daughter of the late Ervin and Gladys (Sain) Kasper.... View Obituary & Service Information

The family of SHARON ANNE MATTSON created this Life Tributes page to make it easy to share your memories.

Send flowers to the MATTSON family.