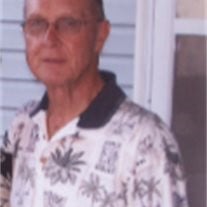 STANLEY L. “MIKE” PIRHONEN, age 77, of Nisula, MI and Lakeland, FL passed away Sunday, February 24, 2013 at his home with his loving wife Beverly by his side. He was born in Houghton, MI on October 10, 1935 the son of the late Leonard and Saima (Wimpery) Pirhonen. Stanley attended Laird Township Schools and graduated from Baraga High School in 1953. He earned his certificate as a Millwright through Bower Roller Bearing in Detroit. On August 29, 1985 Stanley met the love of his life, Beverly Reynolds of Marysville, MI recently celebrating their 28th wedding anniversary. Stanley was proud of being a veteran having served in the U.S. Army. After the service, Stanley was employed at Bower Roller Bearing until they closed. He was hired by General Motors Corp in 1975, retiring July 1, 1998 with 23 years of service. Stanley was a member of the Cypress Lake Veterans Organization in Florida, the VFW, American Legion and the Moose in Zephyr Hills. He loved the game of baseball and was an accomplished pitcher who assisted his all-star team to wins in 1967, 1971, and 1973. As a young man, Stanley went to Florida to try out as a pitcher for the New York Yankees pitching along side pitcher, Whitey Ford. Upon retirement, Stanley and Beverly chose their home in Lakeland, FL for their winter home. Stanley’s love for the “Detroit Tigers” and baseball enabled him to watch the Tigers practicing, being a Spring Season ticket holder, meeting the players, and people from the North created special memories though out the years. Summers were special for Stanley, as he returned to his beloved Nisula. He was most passionate for the outdoors on his back 40. The love of nature, sounds, and beauty surrounded him. Stanley loved to work in the woods, and would spend hours on his Iron Mule or running his tractor. He also enjoyed talking with the local loggers and truckers and on occasion he would find someone to speak “Finn” with. Stanley was very proud of his Finnish-American heritage. Stanley’s greatest joy in life, were his sons. He often reflected on their lives and would tell the story of when he was a pitcher, his son Kim was the catcher, “darn good one” as he couldn’t let on how the ball stung. Stanley giving him a smirk when it hit the glove. He admired his son Marty for his dedication to coaching Jr. high football and when Stanley could be there rooting him and the team on to victory. Marty would keep Stanley on his toes on the pro football teams and players as they would bet on the teams to see who would win the game. Marty would come to Florida to watch Spring training with his dad on school break to watch games, players, and how they would predict the season. Mr. Pirhonen is survived by his wife, Beverly of Nisula, sons Kim (Bonnie) Richter of Harrison Twp., Marty (Nicole) Reynolds of MaComb Twp., grandchildren Abbey Reynolds, Marty’s twin sons Owen and Conner Reynolds, Erika, Joshua, Tim (Rhonda) Richter, Jacqlyn Schneider, and Tracy Mezzone, great grandchildren Mya Mezzone, and Natealine Richter, sisters-in-law Debbie (Dennis) Marx, and Janet (David) Smith, mother-in-law Stephaine Warsinske, nieces Lindsay and Leslie Smith for the years of baseball growing up and visiting in Florida putting laughter in the air, special niece Heather for the pictures and cards of things happening with her family in Maryland, Stacy Pirhonen, and Lisa Rossland, and his cousins. Stanley had too many friends to list but they were special in his heart. He really treasured his special friendships with Bob Gilstrom, Bud Willette, Carolyn Smith, Wesley and Sadie Ann Kemppainen, Red and Lorriane Miller, Jim Hiltunen, and Bob Maki. He was preceded in death by his sister Elsie Loraine, and brother Eugene “Genie”. Funeral services for Mr. Pirhonen were held at 12 p.m. Saturday, June 1, 2013, at the Reid Funeral Service and Chapel, L’Anse with Pastor Bill Chapel officiating. Interment took place in the Nisula Cemetery. The family received friends at the funeral chapel on Saturday from 11 a.m. until the time of the service. A luncheon was held in the Harrington Gathering Room, located at the funeral chapel immediately following the funeral service. Graveside military honors, under the direction of the Baraga American Legion Post #444 were conducted at the Nisula Cemetery on Saturday at 2:30 p.m. In lieu of other expressions of sympathy, the family suggests memorials in Stanley’s honor to be directed to Grace Free Lutheran Church, Portage Home Health and Hospice, or Alston Baseball Field. Envelopes are available at the funeral chapel.

The family of STANLEY L. "MIKE" PIRHONEN created this Life Tributes page to make it easy to share your memories.